Today, the Sarawak Report has accused the government of inflating the cost of the East Coast rail project from RM30 billion to RM60 billion in order to "bail-out" Jho Low and 1MDB - complete with dodgy looking documents.

This is what they wrote:

The PM’s ‘cunning plan’ is to get the Malaysian Government to agree to inflate the actual cost of the East Coast Rail Project from only RM30 billion to RM60 billion, all to be borrowed from the Chinese Government, in order to disguise the payment of 1MDB’s (and Jho Low’s) company debts!


The East Coast Rail Link (ECRL) is a long-planned project that was put under the 11th Malaysian plan which will link Kuala Lumpur and three east coast states in Peninsular Malaysia. It is 620km long involve a “significant amount of underground tunnelling”. The East Coast Economic Region Development Council has established that a rail route connecting the major ports, business centres and towns in Pahang, Terengganu and Kelantan was vital to achieve growth in the region.

It is expected to take 15 to 20 years to develop as it will involve a lot of underground work and building tunnels across Banjaran Titiwangsa. It is not a trivial project. Here is the proposed route from SPAD website. 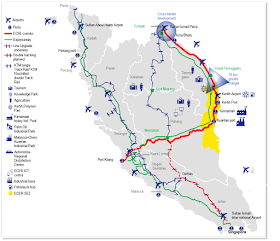 There are multiple problems with Sarawak Report's "expose" though. They are:

1. The project was already projected to cost RM60 billion (not RM30 billion as alleged by Sarawak Report) many years ago.

Here are some links over the years:

This project was already discussed heavily in the popular Malaysian forums in LowYat and Skyscraper City in the year 2013 with the RM60 billion cost prominently discussed.

Even if it was RM30 billion in 2013, costs  would certainly have risen substantially by now.

Another problem is that this project is a Privately Funded Initiative (PFI) and is to be funded by the private-sector, not by the govt. So, is the private sector expected to go along and bail out 1MDB?


Surprisingly though, Sarawak Report did not similarly do a report on the Penang Govt's Transport plan that was recently confirmed by the state govt that has increased RM19 billion within a year from RM27 billion to RM46 billion.

2. The RM60 billion (now RM55 billion) price tag does not seem to be over-priced

At RM 60 billion, this 620km long project - rail and rolling stock - which cut through peninsular Malaysia's Titiwangsa mountain range will include much hard-rock tunneling and bridges, cost about RM96,7 million per KM.

This would be a real bargain compared to the Penang Tunnel project where the Penang Government had signed to pay RM3.5 billion to build a 6.3km undersea tunnel - meaning a cost of RM555 million per KM.

Tunnelling undersea where the earth is mostly sedimentary based actually cost less than tunnelling hard mountain ranges thus making RM96.7 million a bargain compared to the RM555 million per KM.

In fact, the Penang Govt had even awarded feasibility and detailed design reports for that tunnel and 3 associated roads of about 20.3km long costing RM305 million and already paid for about half of that.

And even more strange is that on top of paying the full cost of the construction of the tunnel, the Penang Govt also signed to allow 30 years toll to be given to the same company awarded and paid to build that tunnel. Probably the weirdest privatized concession agreement in the world.

If there is any project to be investigated for jacking up the cost, then it would be those who approved and signed the Penang Tunnel project - certainly not the ECRL.

Another project that gives us a guide on the pricing is the the Gotthard Base Tunnel which is a railway base tunnel through the Alps in Switzerland. It opened on 1 June 2016 with full service to begin in December 2016. With a route length of 57.09 km, this rail tunnel was completed at a cost of more than USD12 billion (RM48 billion).

Assuming that just 10% of the 620km is going to be tunneling through Banjaran Titiwangsa, or 62km then the RM60 billion price seems reasonable.

And here is another one funded by the Chinese too - the railway line for passengers and cargo transportation between Mombasa, the largest port in East Africa, and Nairobi, the capital city of Kenya.

The 609km-long line began in October 2013 and is scheduled to be completed by December 2017 cost USD13.9 billion (RM56 billion). Not only was work started earlier hence lower construction cost but there is little tunneling work due to the flat African plain lands.

So, do you think RM60 billion for our 620km ECRL spanning 15 to 20 years going thru mountain ranges is inflated?

Also, following from multiple feasibility studies over the years - as the year 2005, SPAD had also issued a market consultation RFI in March this year.

With an open RFI like this, it means that it is very hard to so-called inflate the price by double as alleged by Sarawak Report.

Supporting Sarawak report DAP YB Tony Pua also weighed in and asked "Each kilometre of ECRL to cost RM96.8 million (now RM88.7 million) while Pro Mahathir MP Mahfuz Omar sarcastically asked "Is this the most expensive rail in the world? I don't know, but is it (possible) that the government want to builds a gold rail?"

Mahfuz and Tony Pua also compared the cost with the double-tracking rail projects completed recently by the government. Tony Pua asked "That would mean that the ECRL will cost 120 per cent and 143 per cent more than the northern and southern double-tracking projects respectively,” he claimed.

This is despite the fact that the double-tracking projects runs along pre-existing and established lines and does not involve extensive tunneling or building many new bridges.

One wonders what kind of mentality these MPs have when they would compare a project that is to upgrade existing lines with one that is entirely new line going through mountain ranges?

However, both Tony Pua and Mahfuz should also ask why projects in Penang cost so much? Even the costs for the feasibility study and design reports for the Penang Tunnel and a 20.2km length highways project cost RM305 million - which the Penang govt says is reasonable.

Perhaps Mahfuz would now say that the Penang projects are going to be made of diamonds instead since they cost more per km? 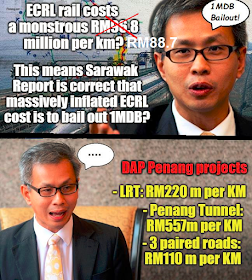 As proven earlier and also in comparison with those projects in Penang which makes it seem like a real bargain instead, the ECRL costs is inline with similar projects around the world despite the tough task of tunneling through the mountain ranges.

3. The so-called bailout payments by Sarawak Report does not make sense.

Chief among this is the so-called buyouts of Putrajaya Perdana Berhad (PPB) and Loh and Loh Corp (LLCB) as indicated by Sarawak Report here:

I am not sure what kind of bail-out this would be if the Chinese were expected to buy-out the previously-listed companies LLCB and PPB for the price of 13.5 times and 7.5 times Price-Earnings Ratio (PE Ratio).

If this was a bail-out then the price to bail-out two profitable companies with a long track-record is ridiculously cheap and below market value.

The other point that does not make sense is that Sarawak Report also said that the Chinese are supposed to buy out the Air Itam land in Penang for USD850 million (RM3.4 billion).

Another problem is that this Air Itam land is not considered a "missing" asset thus any sales proceeds would go to 1MDB and not to IPIC where assets are alleged to be "missing".

Thus how is money going to 1MDB going to be used to cover "missing" assets in IPIC?

Perhaps Sarawak Report can explain this.

I am sorry, but this Sarawak Report allegation is totally off-base and makes no sense at all.  It does however seem to be an attempt to scuttle a legitimate infrastructure project by China in Malaysia which will provide much needed economic development in the east peninsular Malaysia states.

Why do you want to sabotage Malaysia-China relations and our economic development?

As far as 1MDB is concerned, their focus if on resolving the dispute with IPIC which if resolved, will mean 1MDB has no missing money as described in my previous post.

July 27, 2016 PETALING JAYA: Works Minister Fadillah Yusof denied today Sarawak Report’s claim that Putrajaya wants to double the cost of the East Coast Rail Line (ECRL) project from RM30 billion to RM60 billion to pay off 1MDB debts.
“I don’t give a damn about Sarawak Report,” Fadillah told Malay Mail Online.
“It was never discussed in Cabinet.”
The whistleblower site, citing several documents, claimed that the ECRL project would be awarded to the Chinese state-owned company China Communications Construction Company.Sarawak Report claimed that the deal was due to be approved by Cabinet tomorrow at its regular meeting.
The site claimed the deal would allow paying off the debts of companies related to businessman Low Taek Jho (Jho Low).
The East Coast Railway project hopes to develop the East Coast Economic Region.
The 600km rail line will connect Kuala Lumpur with Bentong in Pahang. It will also link Terengganu and Kelantan.

The China Communications Construction Company (CCCC) has denied involvement in any plot to cover up the alleged multi-billion-dollar corruption scandal at 1MDB by inflating a railway contract.

The CCCC told The Australian it had “no knowledge of the claims” made in the Sarawak Report about the alleged plot.

“We will continue to follow those false accusations made by certain media and will take necessary steps to defend our lawful rights,” the CCCC said.