FELDA Old trees - a serious legacy problem that is being fixed.

Tun Mahathir stopped all new FELDA settlers in 1990 and stopped yearly govt allocations to FELDA in 1996 - ordering FELDA to source for its own funds.

Mahathir was more concerned about Proton, Sepang airport, KLCC, industrialization, KLCC etc.. Agriculture and FELDA was not important to him.

As a result, FELDA was deprived of replanting funds and the trees got old. Yields started falling in 2008 and 2009.

If urgent action was not taken then there may be no more FELDA in 10 years or 20 years time as all the trees would be too old to bear fruit.

As FELDA no longer enjoys govt allocations, a decision was then taken to list FGV as a separate unit to take advantage of high palm oil prices and high palm stock valuations at that time.

Hence the second largest listing in the world then raised RM6 billion and allowed FELDA to realize a big profit at that time - providing much needed funds for not only big-scale replanting but for settlers welfare as well as to expand Felda's land bank in Malaysia.

Unfortunately after that, palm oil prices had dropped while the El-Nino caused production to fall which badly affected the FGV share price.

Felda itself remained strong and have been providing bonuses, funds for replanting and funds for housing and welfare for settlers. Felda FC and their stadium is one example of it.

Settlers were one of the biggest beneficiary of the listing of Felda Global Ventures (FGV). Not only was there a big RM15k bonus per household upon listing but billions in free shares were given to the koperasi. Regular payments were also made.

Soft loans were also provided to settlers to buy FGV shares and when FGV shares dropped in price, FELDA also made sure that the cost of FGV shares are halved to limit any possible losses to the settlers.

FGV itself has never once experienced a loss in any financial year since listing and have continued to pay dividends. This year, with the new management and recovery in production as well as better prices, FGV's profit is much stronger.

FELDA is a govt agency and its job is to take care of settlers. Much of the profits gained by FELDA when FGV was listed has been used back on the settlers - causing FELDA to experience losses in the years after the listing. FELDA made bumper profits during the listing. There is nothing wrong in spending most of these profits on settlers.

FELDA has assets of RM27 billion and FGV has sales that now approach RM20 billion per year. FELDA is still very strong and will enjoy solid govt support. There is nothing to worry about FELDA.

The Opposition will spread all sorts of false news and falsehoods against FELDA as if FELDA is in big trouble because they know that FELDA vote bank is important to them.

For example, they claim the RM270mil Semarak land is missing. It is not missing. The land is there and efforts are being made to transfer the ownership back to FELDA.

And how can a Rm270mil land cause FELDA to bankrupt when FELDA's assets are more than RM27 billion - not even 1%.

Also, the share price of FGV has been made an issue by the opposition to suggest that the settlers have lost money. This is a lie. As explained above, settlers are a net beneficiary of the FGV listing and has not lost money. They have benefited.

Yes, there were some impropriety found in FIC but this is now being corrected while any losses will be recovered. Those responsible will face the law.

The aggressive and expensive replanting of trees made possible by the funds raised from the listing of FGV is now bearing fruit as reported by The Star based on RHB Research's findings. 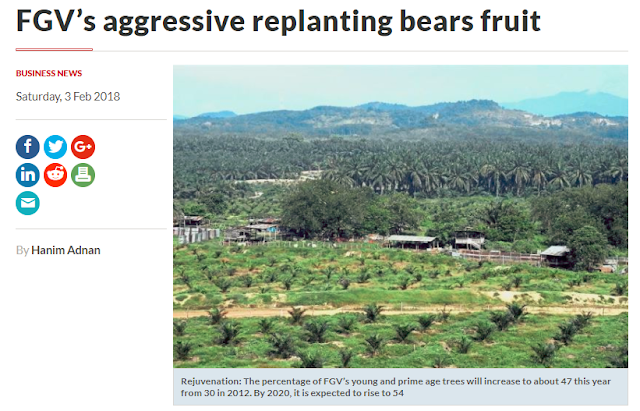 HAVING a high percentage of old oil palm trees has long been a challenge for diversified planter Felda Global Ventures Holdings Bhd (FGV).

When FGV was listed in 2012, almost 50% of its palm trees were 21 years old and above – an alarming figure which analysts often highlight to be a big drag on the yield performance of the group’s estates.

However, fast forward to 2018, this long-standing issue is about to change for the better.Thanks to the aggressive replanting between 13,000 ha and 15,000 ha annually by the group in the past six years, the rejuvenation process of FGV’s old age palm trees is starting to bear fruit.

More importantly, the percentage of young and prime age trees will increase to about 47% this year from 30% in 2012.

FGV is now bouncing back strongly and have tripled their profits for the year 2017.. FGV's net profit for the financial year ending Dec 31, 2017, was RM208.04 million up 213 percent from the RM66.45 million recorded the previous year.
RHB Research calls FGV a turnaround story and has forecast even stronger growth for FGV in the years ahead.

“Investor sentiment on the stock may change once FGV shows its improved age profile from land bank rejuvenation, which would lead to improved earnings; as well as starts to pull through with its promises of non-core asset disposals and cost-saving initiatives.

“We believe these benefits outweigh the risks, as the market is still unconvinced of FGV’s turnaround story.”

Hence, RHB Research is raising its FGV earnings estimates by 6% to 9% for FY2017-2019, to take into account the impact of the sale of palm kernel shells and other waste products, as well as to impute slightly higher losses at its downstream division.

FGV has gone through a period of bad times since listing but the continued focus of improving its operational efficiency and the expensive but very necessary investment in aggressive replanting is showing results.

Gven the situation of the 2007-2009 years when yields started to drop due to old trees, Felda and FGV had not done what it did then after Najib became Prime Minister, FELDA could have ceased to exist in less than a decade.

---
An except from my blog post from 1 year ago follows:

Historical statistics released by the USA indicate that Malaysian palm oil yields have typically appreciated over time, with the strongest period of growth occurring between 1998-2008 when yields increased by approximately 4%annually.


As you see in the graph, in 2009 an unexpected break in the long-term national growth pattern occurred where palm oil yields started dropping.

Oil palm is a perennial crop, with trees potentially producing economically viable volumes of fresh fruit bunches (FFB) over a lifespan of 30 years or so. Peak crop yields are achieved from the age of 9-18, and gradually decline thereafter.

Due to neglect from a past prime minister more interested in monolith monuments and building cars, FELDA's problem was worse than the industry - with more than 50% of their palm oil trees then older than 21 years old.

This means that more than 50% of trees would no longer be economically viable 9 years later by the year 2018 - potentially affecting the livelihoods of hundreds of thousands of people.

So, if you were a responsible Prime Minister and the price of palm oil was high then, what would you do?

You would raise as much money as you can - by listing a part of the company to raise funds or borrow when the price of palm oil is highest.

This would be used to fund a massive and costly re-planting exercise and also acquire younger plantations for Felda in order to reduce the overall age profile of your plantations.

You will also use new high yielding planting materials to boost oil yields which are capable of doubling oil yields.

You suffer a bit now so your future is secure rather than have no future if the previous trend persisted.