No matter how handsome Jho Low is in this picture, don't look at him first. Focus your attention to the tall macho guy right next to him. PM Najib is tall but this guy is even taller than him. Who is he?

Sarawak Report probably thought that by publishing pictures of Najib family together with Jho Low in August 2009 before the PetroSaudi-1MDB jJoint venture was signed will damage Najib's reputation. Actually, the reverse is true as

Today, Sarawak Report proves conclusively once and for all that PetroSaudi is owned by Prince Turki bin Abdullah Al Saud.

In fact, Sarawak Report themselves wrote: "From left to right are Prince Turki, the owner of PetroSaudi; Jho Low..."

Prince Turki bin Abdullah Al Saud (born 21 October 1971) is a member of the House of Saud and the seventh son of late King Abdullah, the ruler of Saudi Arabia then. He served as deputy governor of Riyadh Province from 2013 to 2014 and as governor of Riyadh Province from 14 May 2014 to 29 January 2015.
PM Najib was introduced to Prince Turki by the late King Abdullah and told by the late King to work with his son's company when Najib went on a four-day official visit to King Abdullah in July 2009 - one month BEFORE these pictures of Najib with Prince Turki on the boat ride were taken.

In this meeting, King Abdullah Abdulaziz Al Saud had expressed the possibility of Saudi Arabia participating actively in Malaysia in the Islamic banking sector, expanding participation in the Islamic services and product manufacturing sectors and also raising its equity in the country.

As for Jho Low's involvement, everyone knows he helped founded TIA and appointed by the then Agong, and Sutlan Terengganu Tuanku Mizan.
Jho Low has long been known for his relationships with the Mid East royal families - even before Najib became PM - and also the reasons why Tuanku Mizan asked him to set up TIA.

This fact was never denied and in fact, it was clearly stated in 1MDB's OWN WEBSITE here: http://www.1mdb.com.my/news-coverage/time-of-reckoning-for-1mdb

1MDB never hid Jho Low's early involvement but his involvement soon ended. Out of respect for the Sultan of Terengganu and the then YDP Agong who was the one who asked Jho Low to set-up TIA (which was then renamed 1MDB) and act as advisor - specializing in Middle-East relationships which Jho Low was good at and had earlier proven success - way before TIA or 1MDB existed and way before Najib became Prime Minister,

1MDB just did not want to publicize this fact much due to sensitivities among some Malays.

However, as far as I know, Jho Low never had any formal position once TIA became 1MDB nor was he paid any salary or put on any formal employment contracts or advisory positions.

PM Najib never said he does not know Jho Low.

It would be quite ridiculous for him to even say he doesn't know Jho Low since Jho Low has been quite famous since 2007 and 2008 when he and his Middle East partners via Abu Dhabi-Kuwait-Malaysia Investment Corp (ADKMIC), bought out two listed companies in Malaysia - Loh & Loh Bhd and also PutraJaya Perdana and took a controlling shareholding in listed RM1.7b company UBG Group in 2008 - even before 1MDB came into existence.

Incidentally, ADKMIC was also the company that Sarawak Report claims that Jho Low had "secret" bank accounts in Singapore. Of course, Jho Low is the beneficiary owner since he's the guy who started this company in 2007 along with his Middle-East partners.

He is after all the lead manager.and they did buy three Bursa listed companies in 2007-2008, long before Najib became PM or even 1MDB came into existence - although this fact is easily available via Bursa Malaysia announcements and the various companies annual reports, Sarawak Report will never say this as they will try to give an impression that Jho Low was poor and have no Middle-East partners or relationships prior to 1MDB being set up in June 2008.
Again, I am not sure what Sarawak Report wants to prove here with this ADKMIC bank account listings.

Anyway, let's see more pictures of a Prince and a Prime Minister on a boating trip - courtesy of Sarawak Report. Very "sinister". it seems.

Not sure what is Sarawak Report's purpose to release this. It's counter-productive to them. No bikini babes at all. Just two leaders in discussion.

Shortly after meeting with PM Najib on the boat, Prince Turki then wrote officially on his Royal letterhead to PM Najib to proceed further with the joint-collaboration between Saudi Arabia and Malaysia, in the form of PetroSaudi and 1MDB. 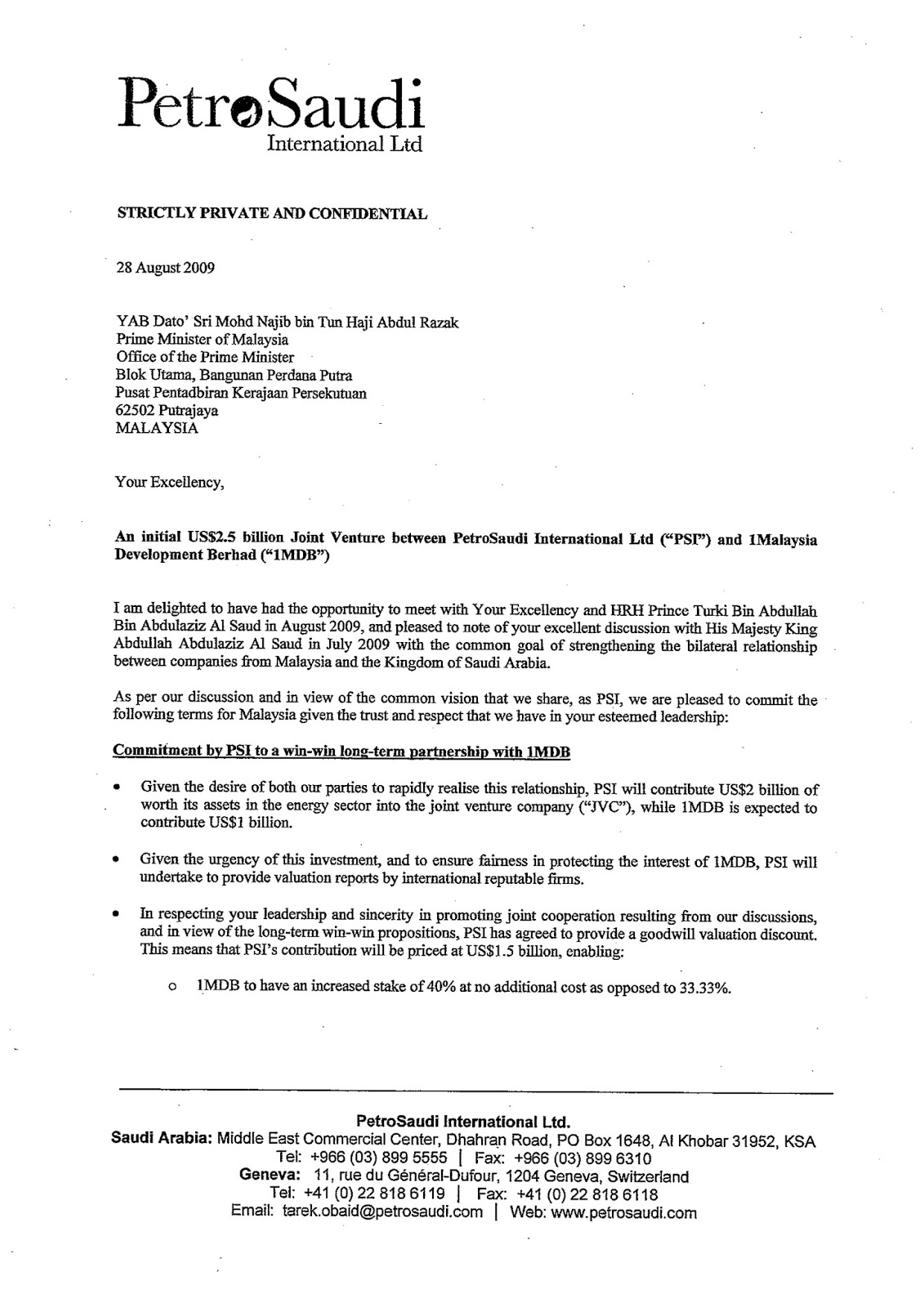 PetroSaudi has the full backing of the Saudi Arabia government, as can be seen in this 2010 letter from their embassy which states that this Joint-venture will improve the relationship between both countries. 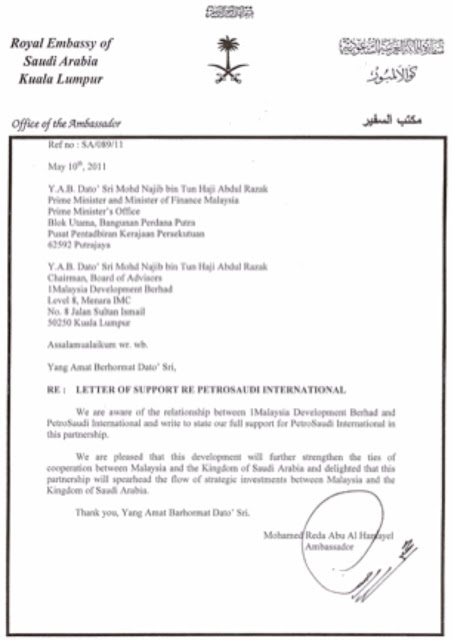 Petrosaudi's own bank, Banque Saudi Fransi also testify to the ownership of PetroSaudi and their financial strength.

Not long after this boat trip and photos, the 1MDB-PetroSaudi JV was thus set-up.

And just 5 months after this boat trip and photos, on January 17th 2010, PM Najib made another 4-days official trip to Saudi Arabia where he was conferred Saudi Arabia's highest honor, the King Abdulaziz Order of Merit (1st Class) by King Abdullah Abdulaziz Al-Saud.

“I consider this a manifestation of the close relations enjoyed between Saudi Arabia and Malaysia, and it symbolises a huge potential for us to cooperate in various fields, not only in the common interest of the two countries but also for the benefit of the larger Muslim community,” said Najib then


Regardless of Jho Low's presence in this meeting, PM Najib did the right things as he was asked by King Abdullah to do business with his Prince's company as part of Saudi Arabia-Malaysia collaboration which is supported by the Royal Saudi embassy and 1MDB got back all their money and made a decent profit - above their cost of funds.

It would be quite ridiculous that PetroSaudi owner the future governor of Riyadh, Prince Turki, the seventh blood son of the then King Abdullah - the custodian of the two holy mosques and the absolute ruler of Saudi Arabia - would want to pakat with Jho Low to cheat Malaysia of USD1 billion.

After all, Saudi Arabia is the world's largest oil producer and exporter with a GDP more than twice the size of Malaysia.and FOREX reserves of USD280 billion.

Saudi Arabia and their Royal family are not hard-up for money at all.

Sometimes I am amazed how Sarawak Report and the opposition can get so many people to believe the absolutely ridiculous story that the son of the absolute king of wealthy Saudi Arabia would collude with a foreign Malaysian Chinese man to cheat Malaysia of USD1 billion.

And true enough - 1MDB got back every single ringgit they invested and made as much as USD500 million (RM1.8b) from this joint venture in three short years - a fact that has been audited by TWO separate international audit firms KPMG and Deloitte over 4 years and shall be confirmed once again by our Auditor-General in their special audit - with full documentation and proof too.

Was 1MDB's funds in PetroSaudi ever at risk? Think carefully. Do you think the Absolute Monarch of oil-rich Saudi Arabia would like world-wide headlines to scream:

I don't think so.

Perhaps one of those emails will also confirm who actually owns the now famous Good Star Ltd - which they claim is owned by Jho Low and used to songlap the USD700million 1MDB loan repayment?
For almost 5 months now, Sarawak Report (and The Edge too) has taken all Malaysians for a ride saying Good Star belongs to Jho Low - but has given zero proof this is the case. No Share certificates, no company search. Nothing!

I am also waiting for Sarawak Report to publish those emails issued by King Abdullah's office regards to this 1MDB-PetroSaudi JV.
Come on Sarawak Report, do the right thing and release all those 3 million emails that you yourselves say you have.

In the meantime, thank you to Sarawak Report for publishing these photos today and helping to finally confirm in pictures (assuming not edited by Xavier Justo) that this 1MDB-PetroSaudi arrangement is indeed a true Government-to-government deal between a Royal Prince and a Prime Minister.