This entire post can be summarized with this picture. So, if you don't want to continue reading my "cheong-hei" post, you can just chew on the picture.


Thai Police Major-General Prawut Tavornsiri have pretty much confirmed that stolen documents sold by Xavier Justo, which after having left Justo's hands to Sarawak Report had been tampered with in minor but important ways to led to significant change in meaning.

Now, before you shout ... but hey! Free Malaysia Today quoted New Straits Times, the UMNO-BN crony mainstream paper, it is important to note that:

Thailand's major newspaper, Bangkok Post had reported this earlier - even BEFORE NST came out with their article:


"This wrongdoing took place in Singapore," he said, adding that police found traces of the data being tampered with by the buyer."

And Singapore's top newspaper The Straits Times ALSO reported this earlier - again, even BEFORE NST came out with their article:

Thai police Chief said "The data on the *Sarawak Report) blog has been TAMPERED WITH to discredit PM Najib."
Ever skeptical, MalaysiaKini probably did not believe those crony-crony newspapers from around the region and later on the same day, MalaysiaKini decided to personally contact Thailand Police spokesperson Major-General Prawut Tavornsiri only to be told by the Major General the following:

"Asked whether the tampering was extensive, Thai police spokesperson major-general Prawut Tavornsiri told Malaysiakini: "The changes are small, but important".

He said Thai police had made this deduction after interviewing Justo, who insisted to them that only the original documents from PSI were passed on to others.

Oops!! Re-confirmation that after the documents left Xavier Justo, someone had made "small but important" changes.

Meanwhile Lester Melanyi had reportedly alleged recently that almost 90 per cent of the content in a report of Sarawak Report on government investment company 1Malaysia Development Berhad had been tampered with to tarnish the image of the Malaysian government and topple Najib.

Melanyi had reportedly admitted to having met Swiss national Xavier Andre Justo, a former executive of PetroSaudi International Ltd now held in Bangkok, who had allegedly handed over 10 per cent of the documents related to 1MDB to Sarawak Report founder Clare Rewcastle-Brown.

Sarawak Report owner Clare Brown had admitted that Melanyi used to work for her Radio Free Sarawak but Melanyi had never written a "single word" for the Sarawak Report site,

But later on, this was reported

"Clare Brown insisted, however, that Lester’s allegations were untrue, including his claim that he had worked for her website, although she admitted to paying him a “few ringgit” once for helping provide an unrelated story."

I thought Clare Brown previously said Lester has no relationship with Sarawak Report and that he was not credible and never wrote a single word for Sarawak Report?

Clare Brown seems to have changed her story so fast?.

Anyway, back to the main topic..

Now, it appears Sarawak Report wants to sue Cabinet Minister Rahman Dahlan saying  "Sorry, This Time We Are Going To Have To Sue!


BN’s so-called strategic communications chief, Abdul Rahman Dahlan, a minister for housing, has on the same grounds outrageously libelled the writer, calling her “scum” and labelled our research as “blatant lies”.

Petaling Jaya Utara MP Tony Pua will be serving Lester Melanyi a letter of demand this week following a video recording by Lester that claimed the irregularities on 1MDB were faked.

Pua said in a statement tonight that the letter from his lawyers will seek an apology from the former Sarawak Tribune journalist and will also be sent to others who repeat Lester's claims that implicate Pua in a conspiracy to fabricate information regarding 1MDB.

Side-track a bit. Lester Melanyi is not the only person that Tony Pua wants to sue.


I will send a real "Letter of Demand" to Lester Melanyi and anyone else I find republishing and repeating Lester's ridiculously baseless assertions.

A few days back, the champion of free-speech, Tony Pua also threatened to sue an ordinary FaceBook users (who happens to be a retiree) who so happened to comment on Tony's FaceBook page who asked him a few questions.

For some reason, Tony immediately asked for that person's address and said he will get his lawyers to send him a letter of demand. This was in the comments of Tony's post here: https://www.facebook.com/MPTonyPua/posts/10153516902554917 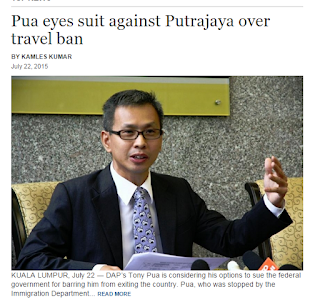 Latest is that Tony Pua also wants to sue the Government for legitimately imposing a travel ban on him as he is under investigation.

That means that in the space of less than one week after the Thai Police held a press conference on the Xavier Justo case where they said the documents were tampered and that up to 10 persons were implicated, Tony Pua has pretty much threatened to sue the whole world.

Wow, just because you are scared does not mean you need to take over Anwar's post as the "U Ulang, I Saman" King of Malaysia.

Personally, I don't see what has a person being bankrupt has to do with spilling the beans. Maybe Lester may make some money from this but it does not mean what he is saying is untrue or should not be taken seriously and investigated.

In fact, Lester was willing to have his statement taken by Police and was interrogated for two days at Bukit Aman. I don't see Clare Brown or Tony Pua doing the same though.

And if allegations by Thai Police was true, then it also looks like Sarawak Report and their gang also had no problems paying RM10 million to buy stolen data.

Buying stolen data is a crime but tampering the data and selectively releasing the information is also a crime - which is what Thai Police had said - the data has been tampered in "small but important" ways after it left Xavier Justo's hands in a plot by a bunch of people to destabilize the Prime Minister and the Government.

Lester Melanyi also said the same thing, which is the data has been tampered by Sarawak Report.

But somehow Clare Brown, Tony Pua and all the media assets aligned to them seems to be wanting to sue and attacking Lester Melanyi and gang.

No one seems to be attacking Thai Police Major-General Prawut Tavornsiri even though he said the same thing repeatedly and to international media too.

No one wants to sue Major-General Prawut and call him a liar too?

In fact, neither Tony Pua, nor Lim Kit Siang, nor Clare Brown nor Sarawak report said a single word about what Major-General Prawut told the world, which is essentially the same as Melanyi's claims. ZERO!

I find this strange.

Perhaps it is a tactic to divert the public's attention to Lester and trying to make us forget that Thailand Police said the documents were tampered in "small but important" ways after it left Xavier Justo's hands.

That is the bottom line. 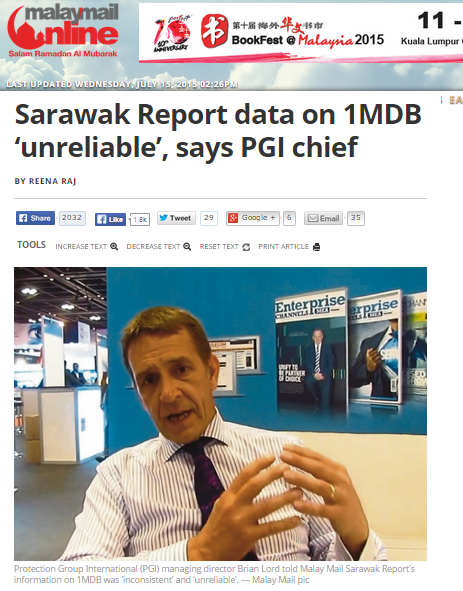 “There are many inconsistencies between the published data and the data which still exists on files within PetroSaudi relating to that period of time. Simply put, it is incomplete data, creatively selected and edited to fit a desired narrative.

Lord added investigations by PGI revealed Sarawak Report had a “subtract of some emails chain and some documentation”. He, however, stopped short of divulging the contents of the emails and data Sarawak Report received.

“It is a combination of all those three things; inconsistency between the original and published reports, substitutable communication and the whole private information claim into Sarawak Report … I can firmly say the information is unreliable and, therefore, it is unfair for anybody to draw judgments on it.”


But somehow, Sarawak Report and Clare Brown also don't want to sue Brian Lord OBE and PGI, (who essentially said the same things as Lester Melanyi and the Thai Police). But they decided to run down his credibility, although in a very laughable manner.

To be honest, although what Lester has said is consistent with what Thai Police chief had said,  I personally don't trust Lester Melanyi as much mainly because he used to work for Sarawak Report and Clare Brown.

It is my belief that this already severely dents Lester's credibility as Sarawak Report had been publishing so many lies and tampered documents since 2011.

This includes the famous 40,000 foreign voters at GE13 story that Sarawak Report posted titled "Down at the airport!" 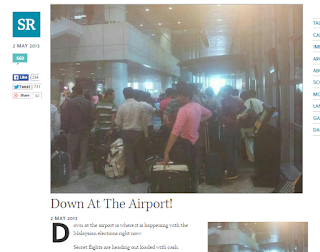 If you look at that article, Sarawak report attached loads and loads of documents, emails and photos and "concrete proof" that, in their conclusion was:

"And if that means shipping in tens of thousands of foreign illegal voters and putting tens of thousands more into BN T-shirts all to con an election from his own people, then it seems he is prepared to try and carry it off.

But Najib’s actions are being watched by the entire nation now and they are likely to do far more damage than good to his cause of winning this election “at any cost”."


As everyone knows by now, months later these allegations were found to be untrue even though so many people were utterly convinced of it at that time.

Months later, all the opposition leaders and the "independent" media washed their hands off the story of the phantom voters (and also the blackouts) and they never mentioned these issues ever again. How convenient!

Later, BERSIH's official GE13 report found that there was no such things.


No no, there were no blackouts,” said Bersih steering committee member (and now President) Maria Chin Abdullah when asked if observers had witnessed any blackouts as alleged by Pakatan Rakyat, as well as by numerous commentators on the social media after the GE.

“We also didn’t know about these foreign voters. There were several reports of that but we didn’t see any,” she added.

Yup, I'd rather believe the Thai police chief rather than Clare, Tony Pua or Lester Melanyi combined,
Posted by Lim Sian See at 20:12