One of the most often repeated lies by the DAP Penang State Govt and Lim Guan Eng is this:


And it will come with newspaper headlines mostly printed in their own state newspaper Buletin Mutiara like this: 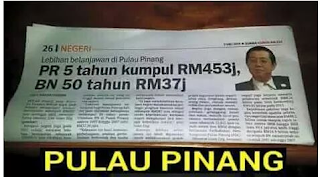 I have lost count on how many times YAB Chief Minister and the various DAP ADUNs have said this.

Each time, they are lying each time they say it.

Firstly, they will show you this graph as "proof".

Looks like too cheap right and BN very corrupted right? That's until we look at the details:

1) 980 acres at Tanjung Tokong:
This deal was signed in 1992 (yes almost 25 years ago) and Please... that Tanjung Tokong land was NOT EVEN LAND! It was a reclamation project awarded 15 years ago and the price of RM1 was just the rights to reclaim and once reclaimed the developer still have to PAY for land alienation premium and also to PAY for the conversion premium and also hand-over 10% of the reclaimed land FOC BACK to the State Govt.

As part of the deal, the developer also had to build subsidized low-cost housing.

You mean there is no cost for reclaiming land? So how can you say it is only for RM1psf? What is the cost of the 10% reclaimed land given back? The subsidized housing? the land premium and conversion cost?

And another part that YAB CM forgot to mention to you is that as part of the arrangement, 191.13 acres will be reclaimed and surrendered to the Penang government which includes 131.09 acres at Persiaran Gurney.

Out of this 191 acres, Penang govt had already signed to give away 110 acres of this land to the concession company constructing the Penang Tunnel.

And the Penang Tunnel company has just turned around and sold 50 acres of this land at RM2.83 billion.

This means that this 1992 reclamation agreement by the BN Govt then would have given 191 acres worth RM10.82 billion worth of land to the Penang Govt - or at least RM253psf - and certainly not RM1 psf (which is the often repeated lies of DAP). 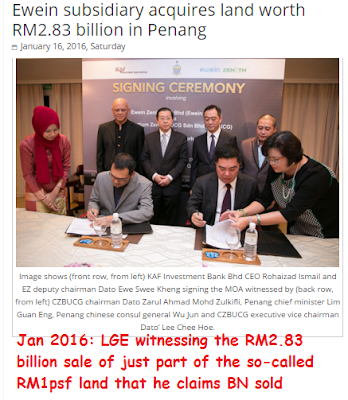 2) 325 acres at Jelutong Expressway
This deal signed in 1997 (17 years ago) is again NOT EVEN LAND!!! The developer was given the right to reclaim 325 acres of land in exchange for constructing the Jelutong Expressway at an estimated cost of RM300m and payment of RM25.4m.

Again, once reclaimed the developer still have to PAY for land alienation premium and also to PAY for the conversion premium.

Again, you mean there is no cost for reclaiming land? No  land premium and conversion cost again?

However, the two year deadline was not met and the project was cancelled.

Parcels 1, 2A, 2B 3A, and 3B measuring 450 acres in total and is mostly for industrial development and not for lucrative residential or commercial development.

The market value for the Batu Kawan land in 2011 was only RM15psf (it is now much higher with the opening of the second penang bridge) therefore land sold in 2004 at RM3.24psf is not considered excessive.

After the Second Penang Bridge was opened in 2014, the land prices in Batu Kawan had shot up tremendously.

Under the agreement, the developer was given the right to RECLAIM land:
- 900 acres for the expansion of the North Butterworth Container Terminal and port-related use and a buffer zone for future port use;
- 706 acres for development by the firm (of which about 200 acres would be  for public infrastructure and open space to be handed back to the state government).*

In addition, the firm had to build seven government quarters in Bertam within three years to replace those affected

This means the firm has only about 500 acres of land to develop with the rest given back to state govt and remember... this is 1997! Even in 2008, the land price is Butterworth is not even RM15psf.

The concessionaire was also expected to finance 5km of the Butterworth-Kulim Expressway beginning from Butterworth. In return, the company would be allowed to collect toll at the present Sungai Nyior toll booth, though this was deferred. This toll concession is still suffering from low traffic and not very profitable.

Again this is RIGHT to reclaim land and not even land.
---

Therefore, a more accurate table would be this instead:

The people are not stupid and knows the difference between land reclamation deals and actual land and asset sales lah!

People also not stupid and know that land prices 25 years ago and now are very different and land prices have sky-rocketed in recent years lah!

How can you still compare?

----
Also, to further justify their lies, the Penang Govt would use this chart:

Again, that is inaccurate.

The truth is that since 2008, the Penang government has sold or traded a way more land than this.


Easily more than RM10 billion of land sold or traded away by the state government since the year 2008 and not much to show for it with State reserves only increasing a paltry RM500million from RM1.1b to RM1.5billion in 2014.

This is because the Penang govt has been very free-spending with their annual state spending which has quadrupled. And if they did not sell land, the state would be running increasingly huge deficit every year.

Selling assets to cover increasing yearly spending can only be possible if you never run out of assets or land to sell.

Unfortunately this is not the case. as even DAP Penang's State EXCO Chow Kon Yeow has already admitted on Jan 7th 2016 that the Penang state govt has run out of valuable land to sell.and have no choice but to do land reclamation. 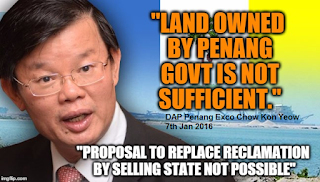 In any case, such strategy to sell assets to fund increasing yearly spending is not rocket science and does not take a genius.

Anyone can do that. Even this person: 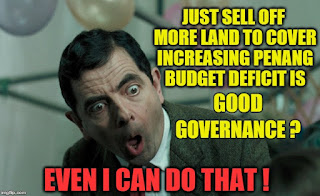