The Untold story of the Crooked Bridge: Mahathir's unreasonable dendam

In his entire 22 years as Prime Minister, Mahathir had never hidden his distaste and hatred for Singapore.

Conflicts and heated arguments between the two countries never stopped and was a recurring issue whenever domestic politics needed a bogeyman.

But the crooked bridge was supposed to be the one final revenge for Mahathir over a humiliation so great that he could never live down or forget.

In 2003, in one of his last acts just before ending his 22-year tenure as PM, Tun Dr Mahathir announced that Malaysia would go ahead and build a crooked bridge.

The other last act before leaving power was when Mahathir mysteriously and very quietly directly awarding a lucrative sports betting license worth billions to his friend for just RM25m - but that's another story.

The failure of his successor Abdullah Badawi to push ahead with replacing the Causeway led Dr Mahathir to viciously attack him in 2006. The move, observers say, eventually pushed Tun Abdullah to resign in 2009.

The still influential Dr Mahathir now claims that Datuk Seri Najib Razak also failed to keep his promise to build the crooked bridge, and has asked Najib to step down.

In a TV interview in April 2015, Najib disclosed that this was one of the chief reasons why relationships between both of them broke down leading to Najib not speaking to Mahathir for 6 months.

“He (Dr Mahathir) had two things he wanted me to do. He wanted me to do away with BR1M and the Johor crooked bridge,” Najib said during a televised interview on TV3.“I respect Tun, just like I respect all the people,” he added.“I gave my views on these issues. I see it as discussions between two individuals... It is quite healthy to have a difference in opinion, but in the end, I still have to be accountable to the rakyat and the party.“Most of these issues were brought to Cabinet and Cabinet will decide on it,” Najib


“Not even one of the things that I had expected would be done, after I stepped down, has been done.”

“Najib still continues to do whatever he wants to do and I feel things (that he’s doing) are not right.” said Mahathir

But why did Mr Najib not proceed with the crooked bridge?

Mr Najib and his Singaporean counterpart Mr Lee Hsien Loong had agreed instead to building a third link between Johor and Singapore. According to Dr Mahathir, Mr Najib told him that Malaysia could not proceed with the crooked bridge as there was an agreement not to touch the Causeway unless both sides agreed.

Mahathir had disclosed that Najib had claimed, during a one on one meeting between them after dinner one day, that there was an agreement between both countries on the causeway and that meant the crooked bridge could not be built unless both sides agreed.

“I asked him, ‘show me the Agreement’,” said Mahathir, implying that there was no such Agreement and that Najib had lied. “Are we an independent nation or a colony of Singapore?’, I asked him.” said Mahathir.

It is thus clear that before Mahathir started his attacks on Najib and wanted him removed for all sorts of reasons, this Crooked bridge was the main reason for Mahathir's anger.

But why does Dr Mahathir want the dang crooked bridge so much?

It boils down to Mahathir's personal humiliation, hatred and anger.

It was really Mahathir's way of punishing Singapore.

Now, exactly what gives? To answer that, we need to reach further back into history ( (Much of this article was adopted from Andrew Gomez's writings here) - Specifically, the years of 1997 and 1998 and the Asian Financial Crisis.

The then-prime minister was in a quandary. He had sacked his deputy, Datuk Seri Anwar Ibrahim and to make matters worse, the country was experiencing a financial crisis unlike any other before.

Currency speculators had devalued the Malaysian ringgit to a fraction of its previous value. Attempts by BNM to prop up the ringgit's value had been expensive and ultimately futile. Malaysia was virtually bankrupt.

There was no more money left due to Mahathir and Anwar's mismanagement of the economy during the 1990s.

With metaphorical hat in hand, Dr Mahathir made a visit to Singapore to meet with PM Goh Chok Tong.

Although unreported in the Malaysian media, Singapore's media nevertheless broke the news that Dr Mahathir had asked Singapore for a USD5 billion loan, as Malaysia was in dire straits financially.

If you don't believe me, have a look at this November 2008 video of Mahathir asking Singapore for financial help on live TV - which of course was never reported in Malaysia.

Other than Singapore newspapers, Hong Kong media also reported then:

It was the first top-level meeting between the two countries since relations, testy even before the added pressure of the Asian financial crisis, started to deteriorate rapidly earlier this year. They last met in April.

Dr Mahathir said he intended to raise funds from neighbouring Singapore, though he didn't say how much or what the money would be used for.

``We need to raise some funds from Singapore,'' he said, adding that Singapore could be of help to Malaysia ``during the economic crisis''. Mr Goh had little to add except that ``we are resuming a discussion'' and that he was pleased by Dr Mahathir's invitation to meet with him.

PM Goh responded positively. Singapore was willing to lend Malaysia the five billion but with "conditions". It remains unclear exactly what these conditions were as only Dr Mahathir and PM Goh were privy to the details.

Dr Mahathir in any event decided that these conditions were unacceptable and returned to Malaysia empty-handed. Indonesia's President B.J. Habibie had been closely observing these matters and pronounced loudly that “a friend in need is a friend indeed”.

Although the IMF had offered Malaysia a similar loan, that too came with IMF-imposed conditions and obligations which Dr Mahathir similarly refused to accept.

It is like this. Singapore did not ask us to go borrow money from them. When you go and ask someone to loan you money, you are going based on a weak position and can expect conditions.

It is up to you to fulfill these conditions or not. No one is forcing you.

It is not a big heart that Tun M went to borrow money from Singapore but sheer desperation.

The trick is not to get into this situation in the first place!

Let's put it on a personal basis. Let's say you one of your friends who is not so close (or even enemy) comes to loan money from you. And then you give conditions for loaning the money.

The other person trying to loan money from you don't like your condition - and then as dendam, he or she attacks you day in and day out.

Ultimately, as we may now recall, the ringgit was made non-convertible outside Malaysia. Effectively, the ringgit overnight became utterly worthless in every country on earth except for Malaysia.

Over time, Malaysia's financial situation stabilised. Malaysia's relationship with Singapore, however, had irretrievably broken down. The good doctor's ego had been severely bruised by his having to "beg" and his humiliation in Singapore.

The hidden message was made very clear when Dr Mahathir proclaimed “there's more than one way to skin a cat”.

The Lion City, no doubt bristling at the threat, shot back via professor Jayakumar: "No cat will simply lie down and wait quietly to be skinned."

When plans for the demolition of the Causeway were revealed and the images of the new crooked bridge were made public, the penny dropped.

Before resigning as PM, Dr Mahathir obtained the assurance of his successor Pak Lah that the crooked bridge would become a reality.

Meanwhile, Singapore now realised that their only source of national water was no longer certain although water supply contracts were still in force. Heavy expenditures were made on desalination technologies as well as "NEWwater" which was purified raw sewage that was "clean enough to drink" and desalination plants.

The extent of which Singapore is now almost self-sufficient in water if they wanted to be and the threat of this crooked bridge and the stopping of water from Malaysia is no longer effective on Singapore.

And plus, Malaysia cannot simply cut water supplies to 6 million people - which is what construction of the crooked bridge would do. This would certainly cause an international incident and possibly war.

This means that the purpose of the crooked bridge is of no more and there is little reason any more why Najib would want to build this and destroy our relationship with our neighbour.

And Dr Mahathir never got his revenge for the humiliation of having to be a “beggar” - which is a reason why Mahathir is so angry with Najib then and wanted him to be removed for "breaking his promise". 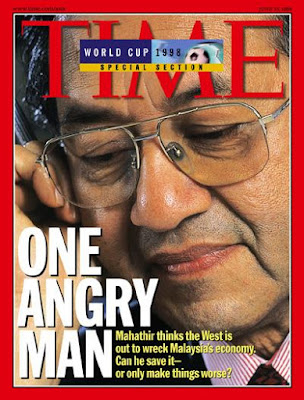 All it boils down to is that Tun Mahathir's initial anger and insistence in removing both Pak Lah and Najib was all due to both Prime Ministers denying Tun Mahathir his revenge and dendam by not building the crooked bridge.

I do not want to dig up the past nor do I wish to take a swipe at any politi­cian, ac­tive or re­tired, but the PM un­der­stands and ap­pre­ci­ates the need to work closely and not to re­peat the past.

I find it hard to un­der­stand the ra­tio­nale or ir­ra­tional­ity of any Malaysian leader who wants Malaysia to quar­rel with Sin­ga­pore. It’s what I called crooked thinking.

"Active or retired leader with Crooked thinking that dislikes Singapore" I wonder who that is?

It is very unbecoming and unreasonable for an ex-Prime Minister living in the twilight of his life still holding on to this malicious dendam and anger - to the extent of wanting to destroy our country's relationship with our neighbour unnecessarily, create chaos in Malaysia's politics which hurts our economy and wanting to remove two democratically-elected Prime Minister.

All because of his own humiliation and his subsequent dendam.

"Dendam is the path to the dark side. Humiliation leads to anger. Anger leads to hate. Hate leads to suffering".
Posted by Lim Sian See at 21:18