This article was written to address and correct Stephen Ng's comment piece of a similar title in MalaysiaKini.

I had expected that Pakatan's failing campaign in Sarawak would mean that race/religion incitement will soon make an appearance.

Again, I am proven right - and the issue of Christian vs Islam is used once again by Pakatan propaganda to incite hatred and divide Sarawakains along religious lines just to get a few more votes.

The surprise this time is that it took so long before religion is used in Pakatan's politicking.

The last time around in the Sarawak State elections of 2011, DAP and PKR went to town using the "Kalimah Allah" issue - blaming the Federal Govt of unfairly treating Sarawakians by banning the use of the word Allah for use by non-Muslims.

The respective communities in the whole of Malaysia and Sarawak went up in arms over this issue - causing much anger, division, suspicions and a fraying of ties between religions.

Later on, it was to be found out that this was all for nothing as we were again played by the DAP and PKR politicians and their media agents.

A few year later in the year 2014, pointed out that it was DAP's Lim Guan Eng himself who in the year 2010, signed into law the Administration of the Religion of Islam (Penang) Enactment which prohibited non-Muslims from using 40 words which included "Allah".

Under severe pressure then, Lim Guan Eng finally had to back-down and sheepishly admit that religion and the ban on the use of Allah by non-Muslim is a state issue and nothing to do with the Federal Government.

Backing down, the Penang Chief Minister Lim Guan Eng even went on to say he will defend Islam and uphold the fatwa banning the use of the 40 words by non-Muslim. 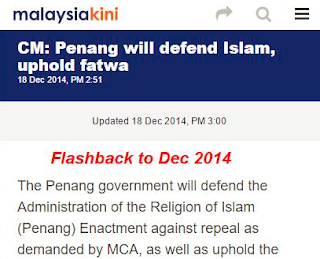 You don't believe me that CM Lim Guan Eng is capable of such flip-flopping and double-speak? Read here: https://www.malaysiakini.com/news/283870

DAP and PKR were then challenged to reverse such bans in Penang and Selangor. Today, we are still waiting for them to reply as the challenge has been met with silence.


Which is why in this Sarawak elections 2016 you no longer hear of this "Kalimah Allah" issue. Did you not find this strange that DAP and PKR no longer dare raise this anymore?

The case of Roneey anak Rebit is certainly an unique case that does not affect 99.99% of the Christians in Sarawak.

At the age of eight, his parents voluntarily became Muslims by secondary conversion; as a result of which Roneey was automatically made a Muslim.

As you know, although religion is under the state govt where our unique 18 points under the Malaysia Agreement 1963 protects his rights to the Freedom of Religion.

Which is why the 41-year-old Bidayuh man is today a Christian, faithfully attending a church in Sarawak with no fear of prosecution or arrest.

The case of the 8 CDs of Jill Ireland Lawrence Bill and the three boxes of Christian educational material from Indonesian publishers destined for Sabah are already resolved.

These two cases happened in the year 2007 and such incidence have not occurred since - except for the case of "Sabah Pastor" Maklin Masiau in November 2014 who had his CDs and Books with "Allah" briefly held by Customs in KLIA2.

Maklin Masai flew in on AirAsia from Medan, Indonesia and was at KLIA2 on transit to Kota Kinabalu. Because he was on AirAsia, his luggage needed to be checkout when he arrived in KLIA2 and then rechecked in for his flight to Kota Kinabau.

He could easily have booked MAS and his luggage from Medan would have simply made it all the way to KK without the hassle of checking out and checking in 6 large boxes of 574 books (133 titles), 419 CDs and five DVDs as his luggage would be handled in transit by MAS and KLIA - so much hassle avoided.

Maklin also appears to have made inconsistent and suspicious statements that aroused the interest of the customs officer. The Home Ministry had issued a statement that "Initially, the bearer (Maklin) said the materials were for his personal use but he later said they were for use in a church in Sabah,”

If you were a customs officer, you would have checked the contents. If you did not, you would not have been doing your job properly.If you check in and out hundreds of CDs at any customs points in the world, you would have trouble. Try doing that in Australia , the USA or Europe and see.

For the record, Sabah pastor iMaklin Masai was also an opposition politician under the Sabah STAR party and contested and lost in the Sabah DUN seat of Pitas.

In any case, Maklin Masai got back all his 574 books (133 titles), 419 CDs and five DVDs shortly later after the confusion had been sorted out with customs.

I congratulate Roneey on winning his High Court case to have his identity card corrected.and I understand his unhappiness when the NRD had decided to appeal the ruling.

And I do understand why this happened.

While freedom of religion in Sarawak is under the state but the National Registration Department (NRD) is under the Federal Govt.

However, CM Adenan today has said that he has got PM Najib's assurance to get NRD to drop the appeal. Thus this case is closed - thanks to CM Adenan's quick action.

This quick action is yet another proof of CM Adenan's commitment to be fair to all races and religions in Sarawak - including the Christians in Sarawak. 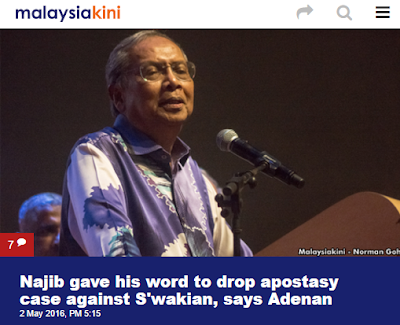 Perhaps CM Adenan can do one better and work out a long-term solution with PM Najib and Putrajaya to ensure that such cases like Rooney's will no longer happen again for citizens coming for Sarawak?

This and other possibilities exist as long as CM Adenan is fully supported by all Sarawkians to continue his journey to ensure the best for Sarawakians.

All it requires is for CM Adenan to negotiate on a strong platform.

It cannot be denied that under 22 years of Mahathirism, many of Sarawak's rights under the Malaysia Agreement of 1963 were eroded.

Among his many many achievements, it is to Chief Minister Adenan Satem,credit, who in joint-negotiation with Prime Minister Najib Razak,,has successfully claimed back some rights and in the process of claiming back many more.

Rome was not built in one day and neither can Adenan and Najib reverse back 22 years of injustice and damage immediately.

But if given a strong platform, I am sure CM Adenan together with PM Najib will do much more over the next few years to address this injustice from years past.

In my opinion, I believe Sarawak Christian,should place their full trust in CM Adenan to protect the rights of Christians in Sarawak and be fair to them.

Sarawakians should take comfort from his quick action to resolve Rooney's case, his sterling track-record of fairness as the Chief Minister of Sarawak so far and the fact that although Adenan is a Muslim, he had studied and got a distinction in school for the study of the Christian scriptures.

How many Christians would know the Gospel of Luke, Matthew, John and James, the Act of the Apostle and the life history of Jesus like Adenan even though he is a Muslim?

And these are the reasons why I firmly believe that the Christian community can vote for the Adenan team with a clear conscience..
Posted by Lim Sian See at 03:05 1 comment: Links to this post