Is Malaysia's petrol price too cheap or too expensive?

Whenever petrol prices increases, people will inevitably grumble. It is human nature that people do not want prices to increase even though our income levels and standard of living has increased have increased over the years.

This article takes an objective view of the petrol price today (RM2.19 as at 9th October 2017) with the aim of giving the average Malaysian a fresh perspective of our petrol price.

1. Our Petrol prices have lagged inflation.

That's right, the RON95 petrol price today has failed to keep up with even our official inflation index - an index that many people perceives as too modest.

Over 36 years ago in 1981, RON92 prices were just RM0.89 per liter. If we were to use our official inflation index as defined by our Department of Statistics and calculate what RM0.89 is today, the price would be RM2.41. This is higher than today's price of RM2.19.

And even if you use the price 27 years ago in 1990 of RM1.10 per liter, the price today when you calculate to include inflation would be RM2.30. Again this is higher than today's price of RM2.19.

Even more incredibly is that global crude oil prices for 1990 was just US$25 per barrel when our exchange rate was US$1 to RM2.40 which works out to RM60.00 per barrel.

Compare this to global crude oil prices of about US$60 per barrel and exchange rate of US$1 = RM4.20 which equals to RM252.00 per barrel, which is 4 times more than the ringgit price 27 years ago.

This difference is explained when you realize that, instead of subsidizing petrol Mahathir's govt had taxed petrol at 58sen per liter for decades until this tax was abolished in 2004.

Yes, Mahathir was collecting money from us on every liter we pumped in the entire 22 years he was Prime Minister.

As a side-note, our modern cars are heck of a lot more fuel-efficient than cars of the past. Hence, we are actually paying a lot less in real times per month for petrol when compared to the 1980s and 1990s. And plus, sometimes our petrol prices drop WAY BELOW inflation - like when it was RM1.60 per liter in the beginning of 2016.


2. Our petrol price is half of the global average price.

According to the global petrol price website which tracks fuel prices globally, as at today, 09-Oct-2017: The average price of gasoline around the world is RM4.57 - which is more than double our price of RM2.19 per liter.

3. We are currently 15th or 16th Cheapest in the world for Petrol.

Out of 180 countries, we are 15th or 16th cheapest for petrol prices right now. All those countries ahead of us are mostly major oil producers with production and exports many folds what Malaysia produces. 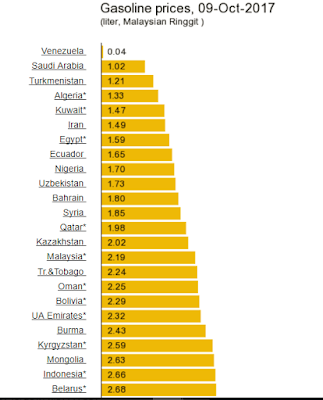 And of course other than Brunei (which has no democracy but produces 40 times more oil per capita than Malaysia), Malaysia has the cheapest petrol in ASEAN.

But look at the rankings above, which country do you want Malaysia's petrol price to be cheaper than before you will be happy?

4. Petrol has become way more affordable for the average Malaysian

Data from the Department of Statistics shows that the Median household income for Malaysians during that year was RM1,077 per month for the median Malaysian family.

This means that if you spent your entire monthly income on petrol, the median Malaysian family could only buy 1016 litres of RON92 per month then.

By the year 2016, the median Malaysian household income has grown to RM5,228 per month.

Even at a price of RM2.31 per liter, the median Malaysian household can now buy 2,263 liters of petrol per month - meaning that petrol today is actually 50% more affordable compared to in 1993 under Mahathir when you take the increase in income into consideration.

5. But wait.... isn't Malaysia a major oil producer/exporter and can afford even cheaper petrol for the rakyat?

Many of us still have this impression from our geography text-books during schooling time but the reality is that Malaysia has changed.

Firstly, have a look at our oil production figures over the years. Notice the trend.

Yes, that's right. Due to depletion of oil fields - especially the cheapest oil fields to extract that is close to land, Malaysia no longer produces as much oil as it did in the past.

Mahathir essentially pumped us dry then without replacing many of the oil fields.

Now, have a look at the number of cars sold per year data from the website of the Malaysian Automotive Association (MAA) which tracks official car sales data. 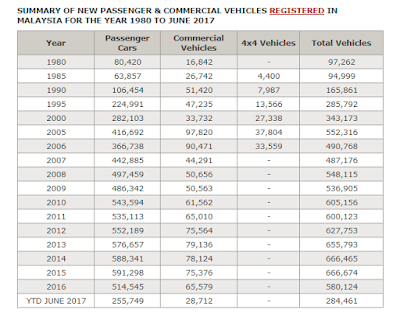 As you can see, the number of vehicles that Malaysians own have exploded. In fact, Malaysia have one of the highest car ownership rates in the world.

Cars and trucks use petrol. The more cars and trucks, the more petrol we use - hence our consumption of oil has been steadily increasing since we last picked up our geography books.

Which leads us to this table. 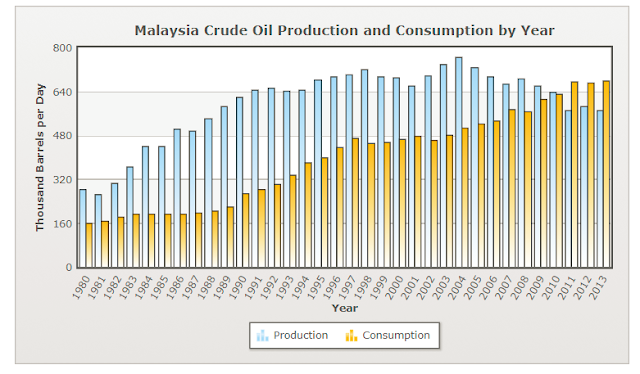 You can see for yourself how the blue bars (our oil production) has dropped while the yellow bars (our oil consumption) keep increasing year after year.

And when the yellow bar is now higher than the blue bar means that Malaysia is now a net importer of crude oil.

Don't say our government didn't tell you or nobody told you this ah. Gohmen did tell you exactly this two years ago but you don't want to read.

In fact, in the year 2002, both Mahathir and Muhyiddin said that our cheap petrol prices were unsustainable as Malaysia's oil production is being overtaken by our own consumption - hence petrol prices needed to be raised.

But don't risau too much. Malaysia is still a very big net exporter of natural gas. Unfortunately, we don't pump natural gas into our cars - unless of course you convert your car to use LPG, which is cheaper than petrol but has limited petrol stations availability.

So, there you have it!

Malaysia's petrol price is not too expensive in the scheme of things and considering history.

In fact, Malaysia really has no right to be among the top 15th cheapest petrol in the world.

He then raised it 3 more times and by the time he retired as PM, petrol price was RM1.35 per liter - 52% higher than what the price was before he became PM.

Not once did Mahathir ever reduce petrol prices in his 22 years as PM.

In the year 2002, Mahathir and Muhyiddin said that petrol subsidies were unsustainable as Malaysia's oil production is being overtaken by our own consumption - hence petrol prices needed to be raised.
http://ww1.utusan.com.my/utusan/info.asp?y=2002&dt=0801&pub=Utusan_Malaysia&sec=Muka_Hadapan&pg=mh_01.htm

You must also remember that during the time of Mahathir, global oil prices were low and was between US$10 to US$20 per barrel while our exchange rate was USD1 to RM2.40 - as compared to US$60 per barrel now.

The difference was also because Mahathir had taxed petrol at 58sen per liter for much of his reign.

Najib then introduced RON95 to replace RON92 and gradually reduced the price to RM1.80.

However, due to blanket subsidies becoming unsustainable, the petrol price was floated in Nov 2014.

After it was floated, the price had fluctuated and was as cheap as RM1.60 for many months.

PM Najib no longer controls the petrol price as the market now determines the price. Therefore, no one, especially Pakatan politicians, ever praised Najib when the price dropped to Rm1.60 then.
(but strangely when the price increases, Najib is blamed - and not the market)

Now it has gone back up to RM2.31 yesterday due to tensions in Saudi Arabia - but it is still among the top 17 cheapest in the world.

At this RM2.31 price, it is still cheaper than the RM2.55 per liter when Najib first became Finance Minister.

You must also take note that Pakatan's alternative budget for 2018 also no longer have blanket fuel subsidies but will only give a 20sen reduction to owners of motorcycles and cars below 1,000cc.

Even the opposition now knows that blanket subsidies for petrol does not benefit the country.
Posted by Lim Sian See at 05:43