Fast 7: To the Malaysians who are now in Australia...

I had noticed that many former or current Malaysians who have now moved to Australia likes to continually attack the Malaysian government over several issues, which is normally propagated by the PakaTun politicians.

Among these issues which they like to use to whack Malaysia are these 7 :


1.  Malaysia is going bankrupt due to high household debts.


This is the most strange as the commonly cited Malaysia's household debt to GDP is 89%. But Australia's ratio just overtook Switzerland and Denmark (both of which is about 120% too) to became the highest in the world earlier this year at 125.2%.

If you don't like to read graphs then you can read about it here in the article titled "How Australian households became the most indebted in the world".

2.  Malaysia is going bankrupt due to high government debts.

They say that Najib has increased the govt debt greatly since he became PM and that the Govt debt to ratio has jumped 13% from 41.24% in 2008 to 53.9% now. This was mainly due to the Great Global Recession that started that year and Najib did some pump priming to save Malaysia from a bad recession when he took over.

However, what is lost to those Malaysians in Australia is that the Govt Debt-to-GDP ratio in Australia also jumped since 2008.

Looking at the current trend and the fact that the Australia economy is struggling now due to the slump in commodity prices and reduced demand from China, many believe that this will continue to grow and could overtake Malaysia soon - whereas Malaysia's ratio has been relatively stable over the past few years.

But the thing is, Malaysia is far from going bankrupt even at 53.9% as at current ratio, there are 71 other countries way ahead of Malaysia in terms of Govt Debt-to-GDP ratio indluign Japan, France, USA, Germany, UK etc.

3.  Malaysia is going bankrupt due to high External (Foreign) debts.

Well, Malaysia doesn't owe any money to IMF and World Bank (we cleared these decades ago). Based on the expanded definition from 2 years ago to comply with international standards which includes foreign ownership of bonds and bank deposits in Malaysia owned by foreigners, Malaysia's external debt is now RM846 billion - or about 66% of our GDP.

But Australians should know that their gross external debt is now AUD 1.94 TRILLION or about RM6,130 billion - this is about 120% of Australia's GDP of AUD1.62 trillion.

In fact, foreigners own a huge piece of Australia.

A country's international investment position (IIP) is a financial statement setting out the value and composition of that country's external financial assets and liabilities. A positive NIIP value indicates a nation is a creditor nation, while a negative value indicates it is a debtor nation.

A news missed out by most people at the end of 2015 is that due to the Ringgit depreciation in 2014 and 2015, the fact that the majority of our government debt is in Ringgit and our continued trade surplus, Malaysia reverted to a net creditor nation status in the year 2015 - certainly very different from what PakaTun saying that we are bankrupt or failed state.

What this means is that Malaysia owns more assets overseas than foreigners own in Malaysia - meaning Malaysia is very good at investing abroad.

There is only a very short list of countries of probably 18 major countries in the world who are in a net creditor status.

And as at end of last year, Malaysia is one of them.

4.  Malaysia is losing competitiveness and their foreign trade is suffering.

Australia trade balance fluctuates quite a bit and has been in trade deficits recently - including a deficit of AUD 2.41 billion in July of 2016, As you can see from the graph, the Aussie trade balance frequently enters negative territory

5.  Malaysia's economy will be destroyed due to implementing GST

Of course this is utter bullshit since 170+ countries have already implemented GST or will implement it by 2018.

In fact, earlier this year there was serious talks about raising Australia's GST to 15%.

Let's not even talk about comparing personal or corporate tax - we all know Australia's tax rate is much higher than in Malaysia.

6.  Because of Najib, Malaysia is experiencing a big drop in foreign reserves as investors pull out money - that is why Malaysia's currency is shite.

Well, did you know that Malaysia's FOREX reserves at USD97.7 billion is more than double of   Australia? USD47,3 billion as at end August 2016? 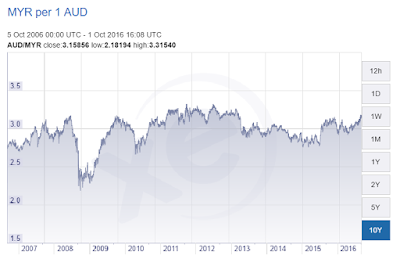 Well, there were a few sporadic cases hat happened which our police have mostly solved.

Comparing gun murders is not pretty but then Australians should know that both Melbourne and Sydney have seen gun shootings and deaths spike over he past year.

And then there are those Malaysian-Australians who would say that there are extremists in Malaysia but You’ll Never Guess Which Country Is the Biggest Per Capita Contributor of Foreign Fighters to ISIS.  It isn't Malaysia, the Middle East or Central Asia or even in Europe. It's Down Under

Other little facts also show that Malaysia's nominal GDP growth is faster, Australia's unemployment rate is higher, you are more likely to afford having maid here in Malaysia and also if you are an Asian (or a Muslim), you'll more likely to run into racism or racist taunts on the streets of Australia than you would in Malaysia.

And those fighting for the rights to have vernacular education in Malaysia while over there in Australia would note that there are no vernacular schooling system in Australia.

Some even parrot the opposition line about the cost of the pandas in Malaysia saying we are wasting money but are ignorant that Australia also received pandas from China where they pay the exact same amounts to China since it is a uniform worldwide policy. But like I had written before, the Panda diplomacy  in giving pandas to countries they most favour actually have big trade benefits far outweighing whatever cost you pay.

Of course, being a ex-Malaysian or a Malaysian now staying in Australia gives you the right to criticize Malaysia but please do criticize based on actual facts and don't parrot the lines of the PakaTun propaganda here in Malaysia coz if you drill-down, you may get embarrassed by the hard facts.

But really, there is little need to whack your ex-country as you already made your choice where to call home - especially if your main source of propaganda and "news" about Malaysian has been these online portals and FB postings from the Red Bean Army cybertroopers. Here are some recent examples of these propaganda online:

As with all the other countries in the world, both places have their pros and cons.

Australia has excellent Mediterranean weather though - especially in the coastal cities.

But our durians are much better (yes, Australia also grows durians).
---
Posted by Lim Sian See at 09:20 39 comments: