"The board of directors of 1MDB categorically denies that it has ever approved any action or series of actions to transfer from the company to any third party other than the intended beneficiary," said Arul in a statement today.
He added that 1MDB had shared information with the auditor-general and Bank Negara Malaysia for further review and investigation.

Anyway, this was the diagram published by The Edge to "prove" Jho Low used USD260m from 1MDB.

These is where The Edge is highly doubtful and full of slander (see the numbered points also in the diagram with here).

The following diagram was published by The Edge and I have annotated the bits in red. 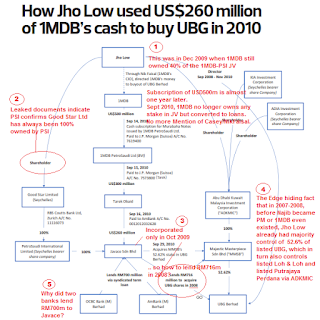 1) The emails leaked by The Edge showed Casey Tang and Nik Faisal discussing possibility of taking over UBG in Dec 2009. During this time, 1MDB-PetroSaudi was still a 40% JV owned by 1MDB and their charter was to explore investments worldwide. And it is clear from their leaked email that other than UBG Bhd, other investments discussed was Venezuela, Argentina (!!) and a visit to a GEMS construction company.

Therefore, even if there were initial exploration on UBG, it is not unusual as that was essentially their job - to look at investments.

However, the JV was cancelled in March 2010 and changed to a full Murabaha loan from 1MDB to PetroSaudi.

Hence, The Edge's emails almost one full year later in Sept 2010 discussing the drawdown no longer had Nik Faisal or Casey Tang involvement in their emails. Why is this?

it is amazing that The Edge can link some emails on initial discussions with a loan drawdown one year later and say this is PROOF!

2) It says PetroSaudi belongs 100% to Jho Low and hence Good Star also belongs to Jho Low. This is obviously wrong as PetroSaudi started way before 1MDB came into the picture and had to be introduced by Prince Turki bin Abdullah Al Saud http://thebenchmark1.blogspot.com/2015/06/petrosaudi-1mdb-jv.html 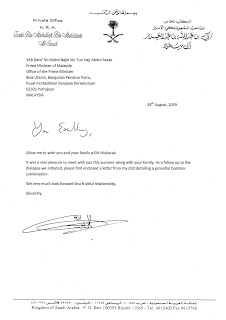 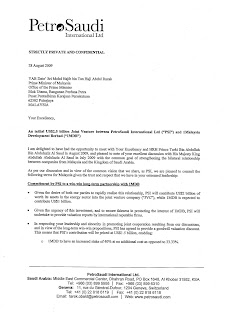 The same link also says GoodStar has always been owned by PetroSaudi
(note: The above documents remain unverified but Sarawak Report and 1MDB have not challenged the authenticity of these documents.)

As you can see, Javace is 99% owned by PetroSaudi and was only registered in Oct 2009, so how could it have loaned money to anyone in the year 2008? 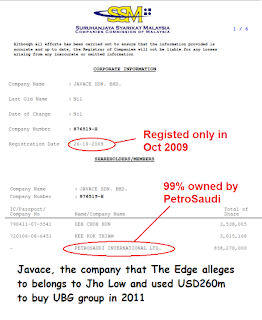 4) The Edge neglected to state clearly as early as the year 2007-2008, Jho Low via his investment company ADKMIC Sdn Bhd ALREADY purchased 52.6% of UBG and two other public listed company. (at least the Edge listed this fact in the diagram). Again In 2007 and 2008, Javace did not exist!! Neither did 1MDB nor was Najib even PM.

5) The Edge also reported that Javace also loaned RM700mil from local banks to buy UBG., If this deal was not good, or if the company, Javace or PetroSaudi Internationale was suspicious, the two banks (Ambank and OCBC) would not have loaned Javace money.
Posted by Lim Sian See at 01:38