Arab money and the Malaysian Spring?

This research paper by the "German Institute for International and Security Affairs" explains in detail how much and why Saudi Arabia was funding friendly incumbent govts to prevent them from falling to presumably western instigated and funded Arab Spring movements: "Leading the Counter-Revolution: Saudi Arabia and the Arab Spring" 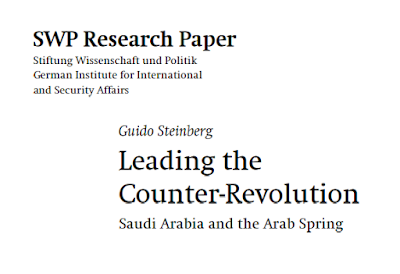 The famous Wharton School of Business from University of Pennsylvania also estimates that Saudi Arabia and fellow Gulf Countries spent at least USD150 billion to counter the Arab Spring movement - not just among themselves but on friendly nations too. 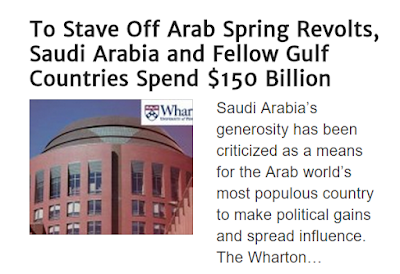 Recently, prolific blogger RPK wrote  "WAS THE RM2.6 BILLION PART OF THE WAR ON TERROR? ",  and pointed out that since 2009, Najib visited the King in Saudi Arabia many times (I counted at least 5 official visits by Najib and a few unofficial visits to do the Umrah).

RPK speculated that the "donation" to Najib could be part of the war on terror and could have come from Saudi Arabia and cited examples of funding that came direct to certain friendly NGOs or parties instead of through official government channels.


The Arab Spring is defined as the period between 17 Dec 2010 – 26 Oct 2013 where many government friendly to Saudi Arabia  - particularly in the Middle East fell.

By the end of February 2012, rulers had been forced from power in Tunisia, Egypt, Libya, and Yemen; civil uprisings had erupted in Bahrain and Syria; major protests had broken out in Algeria, Iraq, Jordan, Kuwait, Morocco, and Sudan; and minor protests had occurred in Mauritania, Oman, Saudi Arabia, Djibouti, Western Sahara, and Palestine. Weapons and Tuareg fighters returning from the Libyan Civil War stoked a simmering conflict in Mali which has been described as "fallout" from the Arab Spring in North Africa.


There is much evidence that Saudi Arabia had been using their hundreds of billions of Petro-dollars yearly exports (oil price was high then) to stop regime change in friendly countries.

High global oil prices mean the Gulf is swimming in petrodollars. A measure of that is the region's combined current account balance, its surplus in trade of goods and services.

The six states in the Gulf Cooperation Council posted a record surplus of about US$350 billion last year (2012), more than 80 percent larger than China's surplus.

There are signs that a larger proportion of the money is being diverted to other destinations.

Instead of going to the West, some petrodollars are now being spent on other Arab states, in an effort to support their economies and restore political stability after the Arab Spring.

Qatar and Saudi Arabia, for example, have provided a combined $9 billion of financial aid to Egypt since its revolution in early 2011.


While Malaysia is not an Arab country nor a North African country, we are perceived as a friendly moderate Muslim country and prior to GE13, we could easily be perceived as yet another country on the verge of a Arab-spring style regime change.

The evidence was plenty. It was even officially stated in its own website that the overt CIA, the National Endowment of Democracy (NED) had funded the Pakatan Rakyat parties.

Prior to GE13, the Pakatan Rakyat govt was very active promoting Malaysia as the next country to fall in the Arab Spring.

Have a look at the many videos on YouTube about this upcoming "Malaysia Spring". Here is one titled "Anwar Ibrahim: Lepas Arab Spring, Dalam Pilihanraya Akan Datang, Malaysia Spring Rakyat Menang"

From abroad, the various BERSIH and Pakatan Rakyat demonstrations and rallies prior to GE13 looked very much like Malaysia is also on the verge of our own "coloured-revolution".


Add the above to PAS' strong association with the Muslim Brotherhood party who toppled the Egypt govt, it is not inconceivable that conservative Muslim Arab powerhouses may believe that Malaysia prior was on the verge of falling to yet another Western-funded Arab Spring colour revolution.

Hence, it is not totally out of the question if a Middle East party donated billions into Najib's personal account for use of the party to prevent a similar "Malaysian Spring" in GE13.

It's not as if Najib used the money personally to buy cincin or gone property-shopping as he would have been too busy campaigning for GE13 during that period of time.

The fund were transferred to Malaysia just a month before GE13 and the account was closed after the elections.

Putting it into Najib's personal account also promises anonymity as it would understandably be a very sensitive issue and hard for Najib to reveal at this moment.

In any case, we shall not speculate more since Najib himself already promised to reveal the source of this donation.

It's not as if Najib said he won't tell - only if DAP and PKR also reveals their funding - which definitely includes details of CIA or NED funding.

Again Najib repeated his commitment: to reveal the donation today:


Najib says Umno is prepared to unveil its party accounts on the condition the opposition is ready to do the same.

He was willing to do so at anytime as the funds received were solely in the interests of the party and not for personal interest.

"Are the opposition that taintless? If they want to know everything, they have to explain where are their funds are coming from...do not only accuse me and Umno while they are gleefully accepting (funds).

"As far as I know, they are also doing well with all kinds of stuff coming in,"

He said as the Prime Minister, he is responsible for whatever happened.

"Do not say I am selling the country. I will never sell the country," he said.

Najib said that the donation received was not because he gave something to some parties.

"I accepted it not because I gave contracts. Other parties can also get the contract and some maybe succeed in converting land for development for those who donated. But there is no link at all.

"That is why MACC said it is not a bribe and it is not 1MDB money," he said.


Maybe this is why the Wall Street Journal revealed details of Najib's accounts - hoping to force Najib to expose the Middle-East counter-revolution efforts against the West's funded and instigated Arab Spring movements?

Is it possible that Najib's domestic enemies, working with the opposition, is taking advantage on this geo-political intrigue - hoping to remove him so that they can be Prime Minister .

I mean, how else could you explain why only a few pages of a thick investigation paper started months ago was delivered by government investigators into the laps of the Wall Street Journal just days after UMNO's party elections were postponed? Selective release of information, very suspiciously timed and leaked by internal sources.

Sure as heck sounds like a conspiracy and coup to me.

If it Middle-East donation without conditions, it is certainly better than UMNO-BN's being funded by tycoons or via UMNO proxies of the Tun Mahathir days - where they will expect to get lucrative government contracts such as the ludicrously profitable take-or-pay IPPs.

At this moment, I am super curious about what PM Najib will reveal about this donation.

It is a great wonder why he is still so cool - as if Najib is certain he has done no wrong and whatever he reveals will turn the tables on his enemies.

Seriously, can't wait. There is more than meet the eyes.