From strong allies to bitter enemies: the Four Strikes that caused PAS and DAP to split apart

As recently as the year 2014, PAS was a big supporter of the now-dead or comatose Pakatan Rakyat.

PAS had always lived up to their end of the bargain to "Pakat" with PKR and DAP and frequently mobilized their formidable million-strong machinery to support Pakatan events and rallies.

PAS may not be a genius when it comes to economic development policies but as a religious party, they are a party that do try to hold on to their principles.

So, how did this partnership suddenly fall apart so fast and why is PAS so bitter with DAP now?

There were FOUR major events:

Event 1: There was no Pakatan consensus decision on the Kajang Move. PAS did not agree and was not consulted.

As declared many times by PKR and DAP leaders, Pakatan operates on the basis of a consensus decision - meaning all 3 parties must agree before any major decision can be implemented.

It does not operate on the basis of majority decision or 2 out of 3. All three must agree.

PAS had objected strongly to this as the Kajang move but it was still implemented was without PAS's agreement - something that would have broken the consensus agreement of Pakatan.

In fact, it seems to have been an unilateral move by PKR itself - apparently as part of a strategy by the then PKR Strategic Director Rafizi Ramli.

DAP secretary-general Lim Guan Eng has denied knowing what is going on in Selangor following the resignation of Kajang assemblyman Lee Chin Cheh yesterday.
He said he was not informed of anything by PKR de facto leader and opposition leader Datuk Seri Anwar Ibrahim, who is now going to contest the Kajang by-election.
Lim said the resignation was also news to him.
"I was not told about the developments in Selangor about the resignation or the Menteri Besar’s post.
"It is best for Anwar to answer. It is not right for me to talk or give views. My feelings on this matter are not important," - Jan 28 2014.


Ever the opportunist, DAP later went along with PKR's and Rafizi's plan - but PAS had steadfastly refused to play along too since the principle of a consensus decision was broken.


This is STRIKE ONE.

Having maintained a good working relationship with Tan Sri Khalid, PAS believes that TS Khalid was unfairly made a victim. And it was not adil or just for such a person to be defamed and slandered - which is clearly against their Islamic teachings.

During the campaign to force Khalid's resignation, PKR and DAP even came out with a 91 page dossier of allegations against Khalid accusing him of all sorts of corruption and general wrong-doings. These allegations were widely repeated in the ceramahs and talks of DAP and PKR leaders state-wide.

Khalid was of course incensed at this and sued PKR for defamation in August 2014. At that time, Khalid even instructed his aides to submitted PKR’s report on their boss’ alleged links to dubious deals to the Malaysian Anti-Corruption Commission (MACC), requesting the anti-graft body investigate the party’s claims - hence becoming the first ever (and still only) person in Malaysia to report himself for a corruption!

PAS' initial judgement that Khalid was fitnah-ed was proven correct as one year later, way after Khalid had been removed as MB, Khalid essentially won his defamation case against PKR when PKR's ex-Secretary-General read out an open apology in court.

The apology was unconditional and PKR admitted each and every allegation against Khalid was false and defamatory.


In an amazing display of shamelessness and general thick-facedness, both Rafizi Ramli and PKR tweeted that Khalid Ibrahim and PKR had apologized to each other and that Khalid has withdrawn the defamation suit!!

Khalid did not withdraw the suit but accepted PKR's unconditional apology in court as settlement.

And as for Khalid Ibrahim's so-called apology to PKR, here it is. Read it and laugh. 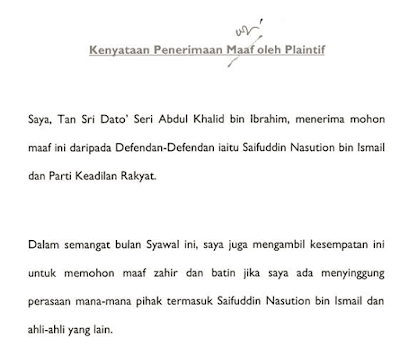 How PKR and Rafizi Ramli can mistake a "Maaf Zahir Batin" in the spirit of Hari Raya then for an apology when compared to their own unconditional apology is beyond me. A total disgraceful spin.

And they dare call it "both sides apologize to each other".

If you want to see the full apology judgement straight from Khalid's lawyers, Bon Advocates, you can click here.

To date, DAP has not apologized to Khalid Ibrahim or admitted they were wrong to join PKR in such slandering of Khalid. And the most amazing thing is that just before DAP joined PKR in the slandering game calling Khalid as corrupt, on Feb 7, 2014: Selangor DAP head and MP Tony Pua says MB Khalid is an extremely honest and hard-working and Tony has no question, no doubt in his mind and his heart that MB Khalid is extremely honest, hardworking, completely clean and corrupt free. Listen to Tony Pua say this in public just months before DAP and PKR decided to stab Khalid Ibrahim in the back and defame him as corrupt just because they wanted to remove him to allow Anwar or his wife to take his place as Selangor MB.

Anyway, PAS was vindicated to have stood for justice and refused to join PKR and DAP to "fitnah" Khalid.

This is STRIKE TWO.

Two of PAS' assembly-person broke ranks and sided with PKR and DAP in signing a statutory declaration supporting Wan Azizah as the Menteri Besar.

PAS president Hadi Awang was furious that his partners can do such stuff to him and his party. You can listen to his fury here:

I guess no party in the world would tolerate their so-called party "stealing" their elected representatives.

If you respect your partners, you would not have accepted the two statutory declarations from your partners and going against their party stand. It's definitely a big stab-in-the-back.

This is STRIKE THREE.


It needs to be noted PAS very existence is to uphold Islam in Malaysia and it would be unthinkable if PAS would give up their fight for Syariah and Hudud laws.

Which is why the Hudud issue had always been a thorn in the Pakatan relationship which led to frequent arguments between them in the early days of Pakatan Rakyat post 2008.

This led to a secret meeting in Sept 2011 between them where it was initially reported (and then the article was quickly deleted by Malaysian Chronicles but not before other blogs coped it):

After a marathon meeting where tables were banged and DAP chairman Karpal Singh was even out-shouted by his own party mates eager to come to grips with a problem that has shaken the Pakatan Rakyat coalition, agreement was finally reached and everyone got most of what they had hoped for.

Firstly, PAS Spiritual Adviser Nik Aziz Nik Mat was given the nod to pursue his agenda for hudud law in Kelantan, where in 1993, long before the Pakatan was formed he had passed hudud into law at the state assembly.

This is a major concession from DAP and is in recognition of Nik Aziz’s contribution to the country and the opposition coalition. The same recognition was extended to Terengganu, where PAS president Hadi Awang had gazetted hudud into law in 2003 but was also unable to implement it.


In return, DAP won the acknowledgement it sought from PAS that the Pakatan’s Common Policy Framework (or joint manifesto) and their Buku Jingga (or joint socio-economic blueprint) would remain as they were, without provision for the inclusion of hudud.

The nod to allow Kelantan to pursue Hudud was never made public in subsequent Pakatan speeches as they preferred to just continuously parrot the line that "Hudud is not in Pakatan Common Policy Framework".

Eventually after GE13, PAS tried to pursue Hudud in Kelantan again and DAP resisted strongly and started to abuse PAS.

Then the fireworks started.

Responding to this issue, a day later also in April 2014 PKR Vice-President Tian Chua told the media that DAP and PKR had indeed agreed to Hudud in Kelantan - which led to DAP's Lim Guan Eng calling "Tian Chua a irresponsible and unethical liar".


Eventually, a copy of a jointly-signed letter by Hadi Awang and Lim Guan Eng dated just before GE13 started surfacing. 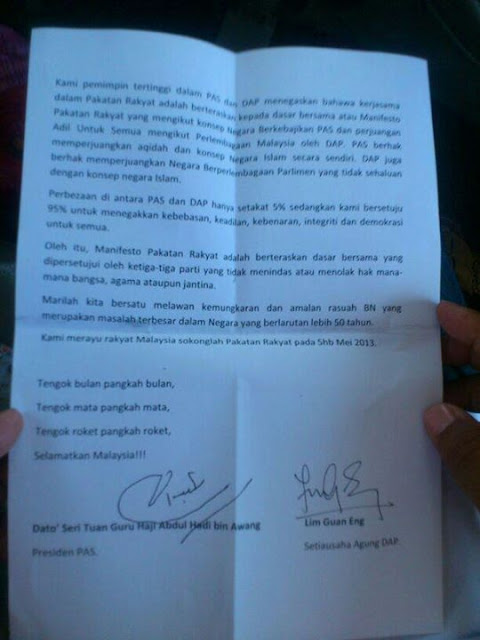 In that signed letter, it was clearly stated that "PAS berhak memperjuangkan aqidah dan konsep Negara Islam secara sendiri. " Now, unless Lim Guan Eng was ignorant that Negara Islam also included Syariah Laws and Hudud laws, then it is clear that DAP had allowed PAS to pursue Hudud too since he signed on it!

That letter was also posted in Hadi Awang's official FaceBook page and can be viewed here.

And if you believed that the letter could be faked or Hadi Awang was lying, you can watch the video here and see who is in the video when they read out the jointly-signed letter just before GE13 to the assembled PAS attendees.

Therefore, in their opinion PAS is furious that DAP had broken their word and signed agreement. And not only that, PAS is angry that DAP leaders had attacked PAS leaders and Hadi Awang so severely and rudely - calling Hadi Awang all sorts of name.

This breaking of a written agreement and past consensus and blatant public denials by DAP who even had the cheek to turn around to attack PAS as lying is probably the last straw for PAS.

And.. This is STRIKE FOUR.

Given all the above, the relationship between PAS and DAP seems irreparable.

Who is lying, who is telling the truth, which parry held on to its principles and which party cannot be trusted is pretty clear - despite what DAP claiming that the fault for the broken relationship is on PAS.