Rafizi is worried about sale of Edra?

Today, PKR's Rafizi Ramli made a statement in Parliament about the possible sale of 1MDB's Edra to foreign companies. 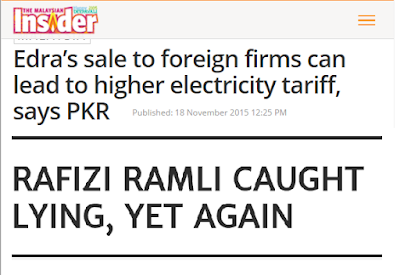 The problem is that Rafizi has again been very economical with the truth. Here is why:

Rafizi: Electricity tariffs might be raised if 1Malaysia Development Berhad (1MDB)'s Edra Energy is sold to foreign firms, PKR warned today.
PKR secretary-general Rafizi Ramli also alleged that Putrajaya had decided to relax previous restrictions on foreign ownership of energy assets so that consortiums from China and Qatar could bid for Edra at a higher rate than market prices.

LSS: Firstly, if 1MDB did not come into the picture to buy eh/ the power plants would have LONG BEEN SOLD to foreigners already.


Do you want 1MDB to sell lower and lose RM2 billion so you can whack 1MDB for losing money? And if 1MDB sells to Tenaga, you will say that Tenaga is bailing out 1MDB.

Countries such as Indonesia, Singapore, India, Australia and Thailand allows up to 100% foreign ownership in their electricity generation industry. In fact Thailand currently imports 7% of their power from neighboring countries such as Myanmar and Laos and this is scheduled to go up to 20% in the next two years.

In fact, Malaysia's YTL is the largest private owner of Singapore's Independent Power Plants. In fact, 80% of power generation in Singapore are owned by foreigners.

Power plants are not like other industries such as shipping or airlines and you can simply pack-up the power plants and send it overseas via DHL or Poslaju. As long as the appropriate legislation and protections are all put in place, there is nothing to fear.

Even having said this, TNB is still the monopoly holder of the most important part of the business - the transmission and sale of power to consumers, thus Malaysia is still firmly in control of the power business in Malaysia.

And if TNB buys Edra, their market share for electricity generating increases form 50% to 65%. On one hand, Pakatan wants an end to monopolies and less involvement by GLC in business saying it is crowding out the private sector but on the other hand, Pakatan is insisting on the exact opposite.

National security is simply not an issue at all anymore and a very lame excuse from Rafizi Ramli.

As you can see from the list above, out of the dozen or so power plants owned by 1MDB's Edra Energy, the majority are foreign power plants.

If other countries are not afraid of foreign ownership of their power plants, why should Malaysia be?

Rafizi: Power purchase agreements (PPA) of the IPPS in Edra would be up for renegotiation in 2016 and 2022, and the firms might use the opportunity to negotiate for higher tariff rates to make up for the higher price they would pay. "They can negotiate favourable terms for themselves and no one will know because the negotiations are secret," Rafizi told reporters at the Parliament lobby.

Rafizi is hopelessly out of touch on this. In fact, his accusation that PPA rates are direct secret negotiation is an outright lie.

Since the year 2012, all PPAs are based on open competitive bidding tender. Here is the announcement by Suruhanjaya Tenaga calling for the tender.

And here is a news story of the results of that open tender.


He noted that the bidding exercise was done in a transparent and open manner with eight parties initially selected with six coming up with final offers for evaluation.

The first-generation IPPs' PPAs, which will expire between 2016 and 2017, are not being renegotiated and the competitive tender exercise will replace these as the country plans for future energy demand.

Here is the Maybank analysis of the outcome of the open bidding in 2012 that showed that the open competitive bidding for the PPAs have significantly slashed power rates - ending the sweetheart deals of the Mahathri-era lop-sided IPPs,'

In fact, YTL's two power plants just expired on Sept 30th 2015 and only plant was renewed on a short term 2 1/2 years basis while the other plant was not renewed at all.

This being the age of competitive open bidding, it can be argued that foreign players of substantial size, access to cheaper cost of funds and expertise could even lower the price of electricity instead of raising it - to the benefit of all Malaysians.

Under PM Najib, it is clear that the days of direct negotiation with well-connected private cronies and lop-sided power agreements that hurts ordinary Malaysians for decades are well and truly over.

Rafizi: The China and Qatar consortium is paying RM2 billion above market value to buy Edra - above Tenaga's offer.

Dear YB Rafizi, market value is simply what others believe the business is worth and willing to put their money where their mouth is and pay that amount for it.

The sale of Edra was done via an open tender where interest was high and 1MDB had to even kick out some bidders and finally came to a final shortlist of 4 winners - and among all these bids, Tenaga was always at the bottom of the bid price.

If I didn't know any better, the attempt by PKR to stop the sale of Edra to the highest bidder in a competitive international tender sounds like yet another deliberate sabotage by Pakatan of 1MDB's rationalization plans.

This is not the first time, of course and probably won't be the last.

In July 2015, PKR's ally DAP has already done this by stopping the legitimate sale of 1MDB's RM1.1 billion worth of land in Penang, which DAP controls - thus trying to scupper 1MDB';s efforts to dispose of assets that is no longer needed to raise cash and pay off debts.

Pakatan is dead-scared of 1MDB being fully resolved.

In fact, not only will the debt be fully wiped out but when the rationalization is complete, 1MDB will hold between RM10 billion to RM12 billion in net assets.

So much for 1MDB heavily in debt or billions of dollars stolen by a fat Chinese man or  by Prime Ministers.

It is not in Pakatan's interest to allow 1MDB to be resolved and be seen as successful - even though a resolved and debt-free 1MDB is to the betterment and the interest of Malaysia.

Pakatan's own selfish political interest seems to over-ride the interest of the country itself.

The question I get asked a lot is:

Why buy the IPP (Independent Power Plants) when they can get it cheap by waiting for it to expire.

So, we wait four years for two plants to expire (out of 15 plants) and wait four years to help restructure the IPP industry and also miss out on the bidding for the additional 3 new plants, is it?

2. The Genting plant got renewed for for another ten years in 2012 - mere months after 1MDB bought it. Everybody knows it will get renewed as it was a relatively new plant. Genting would probably be unhappy that the extension was for so long and gotten so soon after they sold it.

3. The other major purchase was Jimah Energy, the second largest IPP in Malaysia. It was bought by 1MDB in 2013. It started production in 2009 and has a 25 year concession period - expiring in 2034 - not anywhere near to expiry.

4. The 440MW Powertek plant is part of  13 power plants with a capacity of 3,951MW that 1MDB bought from Ananda. Ananda was selling it as an entire package and not piece by piece.

7. It is not unusual to pay a premium when you take over a company. Nobody sells to you at net asset value - but based on market price, which was set in the international tender.

For example, a most recent example is this: Dubai's Emirates National Oil Company (Enoc) has made a potential offer to take over Dragon oil at 735p per share - a premium over the share price of 509p at that time.

So, what do you mean over-paid for the assets?