Further to my blog post two days ago on the USD6 billion settlement between IPIC and 1MDB, there has been a new development.

In IPIC's announcement to the London Stock Exchange on the settlement with 1MDB dated 24th April 2017, the last paragraph states this: 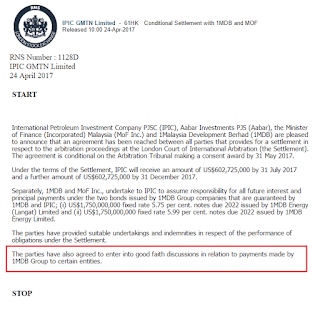 "The parties have also agreed to enter into good faith discussions in relation to payments made by 1MDB Group to certain entities."

By any account, this is an unusual statement to make as it hints that 1MDB may have paid IPIC or Aabar the disputed amounts but not directly saying it.

The reason is simple.

IPIC cannot say it as they had previously announced to the stock exchange and to the world that they had never guaranteed the fund units and that Aabar BVI does not belong to them.

In fact, they had issued a press statement back in April 2016 that effectively says it didn't receive billions in payments sent by Malaysia fund 1MDB.

IPIC cannot now say "oops, we made a mistake" as it would be a big loss of face and unimaginable damage to their reputation.

It is as good as saying that their two top officials at IPIC and Aabar had cheated another country and pocketed billions.

In fact, it is also very hard for IPIC to answer why a Abu Dhabi Govt owned sovereign fund would want to guarantee a whopping US$3.5 billion worth of bonds issued by another country;;s company in 2012. This guarantee was never disputed by Abu Dhabi.

Imagine if Malaysia Govt had to announce that their top officials of Khazanah and PNB had cheated billions from another country and pocketed billions in their accounts?

This is also the reason why the former IPIC Managing Director and Chairman of Aabar, Qubasi as well as the Managing Director of Aabar Badawy has never been charged for any crime in this whole affair despite all the evidence pointing to them in the signed agreements and payments.

Today, Finance Minister II Johari said again that based on the documents he has seen, he is very confident that 1MDB will win the arbitration.

Of even greater consequence, MalaysiaKini reported today that Johari has revealed that there is an official letter from the Registrar of Corporate Affairs of the British Virgin Islands Government dated Aug 11, 2016 that confirms that the disputed Aabar BVI is officially owned by IPIC. 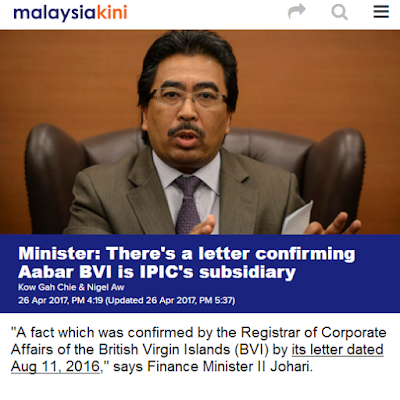 The existence of this official letter would be a bombshell to IPIC and its arbitration efforts.

On top of that, 1MDB also has in its possession, verified officially signed letters of guarantees by Aabar's top bosses then that they guarantee the fund units totaling USD2.5b, which 1MDB is monetizing now - probably with IPIC's help to honour the guarantees. 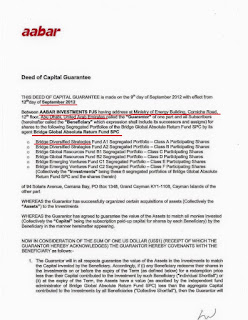 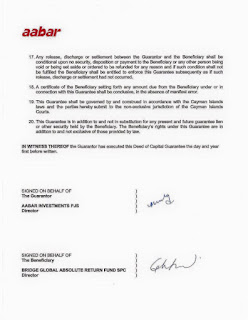 
"To overcome the hurdle, 1MDB agreed to waive its right to claim from Aabar the US$2.43 billion guarantee. In return, Abu Dhabi arranged for an undisclosed entity domiciled in the Seychelles to buy the units from 1MDB at the guaranteed value, to be settled by deferred payments from this month to October 2022, said a senior financial executive familiar with the matter.

This would also mean that it is very likely that IPIC has agreed that by the year 2020, 1MDB can claim back the USD3.5b from them which 1MDB will then use to pay the USD3.5b bonds due in the year 2022.

So, the USD2.5b + USD3.5b of 1MDB that was previously in default has been resolved.

This completes the last step of the rationalization plan and prove that not a single ringgit of 1MDB's money is missing.

No RM2.6 billion issue and no Goodstar money being diverted anymore.

Therefore, not a single Ringgit of Government money or tax-payers money has been used to "bail-out" 1MDB.

Yes, the opposition will be very angry at this development as they have attacked 1MDB for more than two years now and it was their main attack weapon against the Government - thus there will be disbelieve and heck of a lot of anger.

But the reality is that the last plank of the rationalization exercise is well in progress.

Despite various Pakatan people lying that Malaysia now have to pay double to IPIC or that taxpayers now have to foot the bill, the foreign investors and the financial markets don't believe them.

If foreign investors believed that Malaysia govt now have to pay USD6b extra to IPIC or have to use tax-payers money to bail-out 1MDB, they would have punished Malaysia and sold down our shares or taken money out. Not put money in.

Over the last two days since the settlement announcement, our Ringgit and our stock-market has gone on quite a rally today and yesterday, which signifies strong investor confidence.

The Sun daily also reports that analysts have said "the arbitration settlement agreement between 1MDB and Abu Dhabi’s IPIC is also seen as a boost for the local market."

UPDATE: As at end of 2nd May 2017, the Ringgit and Stock Market has now entered a FIFTH day straight of strong gains.

1MDB did a lot of good too!

Some may argue that things may have gone wrong with the initial transactions but then hindsight is 20/20. Most importantly is that 1MDB and the govt has delivered in recovering all the money and ensuring all 1MDB's debt has been settled.

On top of all those Corporate Social Responsibility (CSR) exercises such as rural electrification, mini water projects, mobile clinics, scholarship for students and the tens of thousands of people sent for their Haj, 1MDB also have done good stuff including helping Malaysia finally solve the lop-sided Power Plant agreements of Mahathir's that has cost the Rakyat RM200 billion over the past 20 years.

And then there is the Tun Razak Exchange, which is progressing fast and includes Malaysia's tallest building (taller than KLCC) to be completed in 2018 and is already half-way completed.

Here is a video of it's progress as at end December 2016.


This is the progress of the KLCC-beating TRX Signature tower earlier this month: 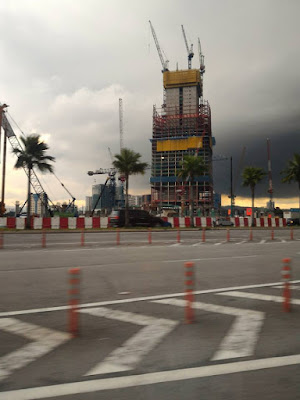 And of course, Bandar Malaysia is also coming up which is deemed as the ASEAN hub of the One Belt One Road initiative that connects Malaysia to the world by rail.


For all of Pakatan's attacks on 1MDB weaknesses, you will seldom see them highlighting the positive side of 1MDB which you can see is very substantial too and crucial to the growth of Malaysia in the coming decades that will generate hundreds of billions in growth and hundreds of thousands of jobs.

The DOJ and Switzerland invetigations

A basic foundation of the July 2016 US DOJ civil suit and the Switzerland investigation was due to the fact that 1MDB said it had paid money ti IPIC but IPIC had then said earlier in 2016 they did not receive such money - thus there is missing money and hence money laundering.

For a more detailed recap on why all those allegedly "missing money" was never legally owned by 1MDB and why I think the USA DOJ civil case and Swiss investigations will now fail  , read my July 2016 post.
Posted by Lim Sian See at 03:40