This is not the first time Rafizi has tried to maliciously link Prime Minister Najib, Tabung Haji and SRC.

His previous attack had caused some 3,600 depositors to withdraw RM500 million from Tabung Haji and lose their place in the waiting list to perform their haj. This eventually caused a big backlash against Rafizi - losing him a lot of trust and support as people's lives were affected negatively. But this will not stop him from trying again.

But first, let's look at the latest allegations Rafizi made in his latest two blog entries here and today:


Assuming (and this is a big assume) all of Rafizi's data and allegation is correct, then the first thing you need to know is this:

FACT 1. Najib is not a board of directors nor in the management of either Tabung Haji, SRC international nor Putrajaya Perdana Bhd or any of their subsidiaries.

This means that under the law, he is not responsible or even aware about the day-to-day transactions and business dealings between the companies,

Also, the second point you must know is this:


FACT 2. SRC International core business IS to invest in companies or projects and make a return.

Knowing this, there is no reason and nothing illegal in what SRC International is doing in having business dealings with Putrajaya Perdana Bhd

FACT 3. SRC International and other companies in Malaysia DO engage in CSR activities.

Petronas does this, Khazanah does this too. And so do public listed companies such as Genting Bhd, which earlier courted controversy for spending RM190 million in CSR on some foundations in 2013.

Which leads us to this

Watch this video where after he was sacked as Deputy Prime Minister, Muhyiddin had admitted himself that there had always been a secret UMNO president account even from way back then which is used for party purposes.

This practise is allowed for under UMNO's constitution as the UMNO president holds a lot of discretionary power due to secrecy and political reasons.

And this is why we come to:

Om September 1st, 2016,  The Wall Street Journal (WSJ) finally admitted that at least USD200 million into Najib's accounts came from Saudi Arabia sources and at least USD80 million can be directly traced to the Ministry of Finance of Saudi Arabia. 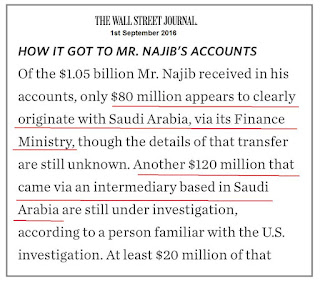 The Pakatan people will never highlight this and you are probably not aware of this.

That there were transfer of funds, was also confirmed by the Saudi Arabia Foreign Minister.

Why did the Saudi's give Najib money? Well it was because of Anwar Ibrahim and his past links to terrorists and also due to Saudi's own interest to stop the Arab Spring in their own backyard which took place from 2009 to 2014.

Do you really think that if Najib had lied about the Saudis that their King Salman will still come here to Malaysia, be so buddy-buddy with Najib and invest RM31 billion in Malaysia in Feb 2017?

FACT 6: Rafizi did not dare accuse that Najib had spent any of the alleged RM27 million on Najib himself but paid to 17 parties including allegedly to former PAS Deputy President Nasharuddin Mat Isa

Now, we know Nasharuddin was no longer Deputy President of PAS as of  the year 2011 and in fact, he was no longer anywhere in PAS leadership before GE13 as he was was expelled from PAS's governing council. He did not even recontest his parliamentary seat at the 2013 election.

In fact, Nasharuddin went on to found a NGO foundation called Yayasan Nassar,  which gave its purpose as:

This could explain where accusations from Rafizi that Nasharuddin received money from Najib in 2014 is wrong. It probably went to his foundation and not to Nasharuddin personally. 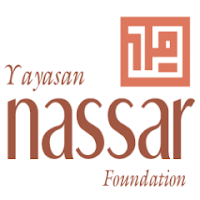 This is why Nasharuddin had denied receiving any money from Najib and had threatened to sue Rafizi.

Also, since Nasharuddin had already been kicked off from PAS leadership in 2013. Rafizi's allegations that Najib's money to Nasharuddin had been used to "buy" PAS in order to "cover-up" 1MDB (which only became an issue in 2015) and be friendly to Najib is so slanderous.

This is why PAS President Hadi Awang says Rafizi is a 300% liar and asked him to repent.

Now, back to Tabung Haji and Putrajaya Perdana and so-called "wang pencen":

This fact is actually contained within Rafizi's own postings where he wrote:

Rafizi even posted the graphic of these milestones. 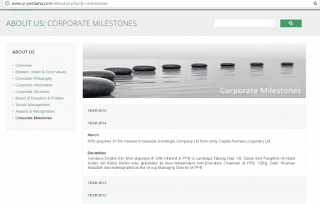 But then Rafizi himself had stated that the first ever dealings between Putrajaya Perdana and SRC international only started in July 2014.

And also, Rafizi himself said that Tabung Haji only invested to buy 30% of Putrajaya Perdana Bhd in December 2014.

Do you see how sotong this is? Back to the future?

Putrajaya Perdana bought those allegedly "Jho Low"-linked companies in March and the first ever dealing with SRC was in July while Tabung Haji came in only in Dec 2014. So, how can it be that any SRC money or wang pencen or Tabung Haji? Back to the future?

In fact, those Jho Low linked companies are holding companies that has 133 million sq ft of gross floor area to be developed in the Medini hub of Iskandar Malaysia, which is worth quite a bit now.

Not to mention that it was Rafizi himself that revealed that Putrajaya Perdana was already a profitable company even in 2013, the year before all those dealings that Rafizi alleges with revenues of RM705 million, current assets of RM445 million and pre-tax profits of RM62 million.

Hence, it is impossible for Tabung Haji money to be paid to SRC. 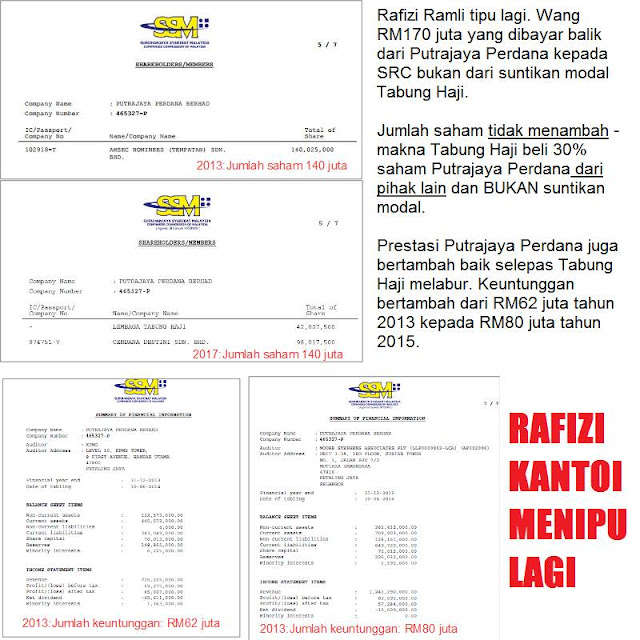 As you can see from the shareholders information above. There was no increase in number of shares after Tabung Haji took a 30% stake in the company - hence it cannot be new shares issued or "injection" (as Rafizi calls it).

In fact, after Tabung Haji bought their stake, the financial performance and profits of Putrajaya  Perdana increased too.

Not anymore. SRC International may have loaned money from KWAP but this money is guaranteed and the entire loan is being serviced properly and not in default.

So, legally it is not wang pencen at all. What SRC international does with their money and their profits is up to SRC and nothing to do with KWAP.

And plus, as Rafizi pointed out, Putrajaya Perdana paid back RM140 million, the bulk of the proceeds, to SRC International within the same year leaving a balance, which were either paid back later or for work done or for the above-mentioned CSR, which SRC is entitled to do.

FACT 8. Putrajaya Perdana Bhd was a listed company. Tabung Haji did not overpay to buy a 30% stake.

And as Rafizi previously showed proof, even in 2013 Putrajaya Perdana already had revenues of RM705 million, current assets of RM445 million, pre-tax profits of RM62 million and after tax profit of RM45 million.

But after Tabung Haji bought the stake, in 2015 Putrajaya Perdana did even better.

This is not considered over-valued if you compare to the currently listed construction company on Bursa where the PE ratio of IJM Bhd is 27.28 times or Gamuda (20.14 times) or Binapuri Bhd (100.23 times).

In fact, As of October 31, 2016, Putrajaya Perdana's outstanding order book and tender book stood at approximately RM1.25 billion and RM1.93 billion, respectively.
This suggest that when Putrajaya Perdana Bhd is eventually re-listed as per their plans, Tabung Haji would make quite a good profit and in no way had lost money to Jho Low, Rafizi or anyone.

As you can see from the above, so many of Rafizi's malicious allegations on SRC and Tabung Haji and Wang Pencen have been debunked as mere lies,

Why would you want to trust someone that even a religious leader like Hadi Awang calls a 300% liar?

Which leads us to our final fact for the day:

FACT 9. Rafizi is a court confirmed serial liar and his self-admitted job is "to hasut the rakyat tiap-tiap hari". So there is very little reason to trust him.

or you can watch him admit it himself here: