In his latest statement, DAP MP Tony Pua has alleged that Malaysian Tax-payers will have to bail-out 1MDB to the tune of RM41.7 billion

After the majority of bank loans and short term debts have been settled by 1MDB in their past rationalization exercise, Tony Pua's statement lists out the remaining liabilities for 1MDB and details how he comes out with the RM41.7 billion figure.

Because 1MDB simply does not have any more substantial tangible assets or cash in its books, the Malaysians taxpayer will have to pay for most of 1MDB’s still-outstanding debts including:
The above sums up to RM8.2 billion and US$7.73 billion, (exchange rate USD1-RM4.33) or a combined total of RM41.7 billion.

*notice that other than the US$1.23 billion due within this year, the rest are all long-term debts.

Tony alleges that 1MDB has no more assets as these assets are now transferred from 1MDB to the Ministry of Finance (MOF).

Only lying politicians would say that assets are transferred but MOF do not need to take care of the liabilities.

The opposition will never admit that 1MDB's current situation has been mitigated and well-managed or the rationalization plan has been successful.

Pakatan has invested too much time and energy over the past 3 years to attack 1MDB and will not give up now as the general elections are near.

They will just continue attacking 1MDB using any excuse. They simply cannot stop now as their entire elections campaign strategy will fail immediately.

Anyway, to examine Tony Pua's claim, let us examine what are the assets left over from 1MDB's businesses:

After selling about 60% of the land in Tun Razak Exchange (TRX), there is still 40% of land left for sale which the govt says they would not sell in the next two to three years until the infrastructure is ready to allow it to unlock higher value and premium later.

The Govt also have ownership of 40% share in the June 2014 Joint-Venture for the 17 acres TRX LifeStyle Quarter project with Australia's Lend Lease group with a gross development value of RM8 billion.

This project comprises a retail mall (which is already 25% leased out) and due to open in the year 2020, 6 residential block and a luxury hotel. Lend Lease is among the largest international property group and is in charge of funding the development (govt contributes the land and helps with approvals) and marketing them world-wide to its international clients.

At the present moment, this 40% remaining TRX land and 40% share of the LifeStyle Quarter is worth approximately RM8 billion but is expected to increase further as the infrastructure is put in place and due to property appreciation.

After the recent cancellation of the sale of 60% share in the Bandar Malaysia project signed in Dec 2015, the government now owns 100% of the land and project.

After value-enhancement, development plans completion, various approvals granted and increased visibility for the project, the former buyers had valued this land as high as RM26 billion today compared to RM10.35 billion valuation when the sale agreement was signed two years ago.

Again, this RM200 billion gross development value Bandar Malaysia project is an appreciating asset that will only increase in value over time as the project develops.

As part of the recently-signed settlement between 1MDB and Abu Dhabi Govt's IPIC, these fund units which was mischievously claimed by opposition for the longest time as worthless is being monetized and the first tranches of payments have already been received by 1MDB from the foreign buyers of the funds.


"To overcome the hurdle, 1MDB agreed to waive its right to claim from Aabar the US$2.43 billion guarantee. In return, Abu Dhabi arranged for an undisclosed entity domiciled in the Seychelles to buy the units from 1MDB at the guaranteed value, to be settled by deferred payments from this month to October 2022, said a senior financial executive familiar with the matter."

Again, this is part of the 1MDB-IPIC settlement signed recently.

Among all assets, this is still the biggest question mark but is anticipated to be resolved as IPIC has little choice since all those legal documents are in 1MDB's favour as the settlement to end the arbitration was signed due to the bigger picture of diplomatic relationships and not embarrass any party. 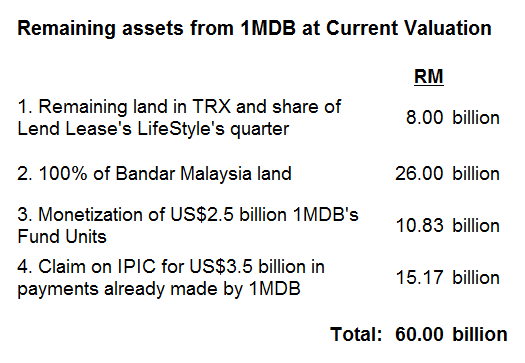 Remember also that the majority of the liabilities listed by Tony Pua are long-term in nature and are only due many years away while the value of the majority of assets listed above are based on current prices and will only appreciate in value in the coming years - hence the interest costs are already well covered.

Which major development projects or businesses doesn't have debts? But the government and 1MDB has done very well to monetize and develop the assets until they have become very attractive assets with great prospect which more than covers the debts and interest.

And this is not counting the vast number of jobs that the 1MDB projects have created and will create as the flagship projects continue to develop.

Also not taken into account are the big Corporate Social Responsibility projects already done, the 8 military bases that 1MDB has helped to fund and develop and the role that 1MDB has played to correct the lop-sided Independent Power plant agreements signed during Mahathir's time and will help save Malaysia and Malaysians approximately Rm200 billion in the next two decades.

So, is RM60 billion more than enough to pay the RM41.7 billion claimed by YB Tony Pua?

In fact, it is very likely that those projects under 1MDB will make huge multi-billion profits at the end of the day.

*UPDATE* If you can believe MalaysiaKini then the profitability of 1MDB will be even more as the forecast that the value of Bandar Malaysia is RM90 billion instead of RM26 billion.

*Mkini now says that 1MDB will make huge profits*
Mkini's former business editor and co-owner of Kinibiz (which failed and was closed down) just wrote an article with the title "Here’s how gov’t can make RM90b from Bandar Malaysia". 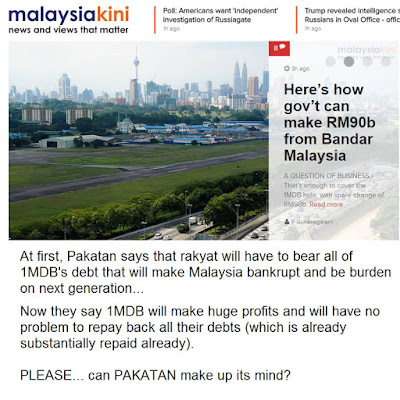 Basically, he is saying that the development of Bandar Malaysia has great prospects and 1MDB will end up making a lot of money - enough money to repay all its debts (which they allege people had songlap) and still have great profits (which they again allege that govt can songlap in future).
For so long, Pakatan and their friendly portals have been saying that govt will go bankrupt because of 1MDB's debts (which is already substantially repaid with the rest taken care of) and that govt has to use GST, use fuel subsidies, use sugar price bla bla bla to bail out and that this debt will be a burden on your next generation and the generation after that.
_But now the Pakatan folks are saying that Govt will make huge profits on 1MDB and there is no more debt that will be a burden on your next generation and the generation after that or need to bail-out?_
Please... make up your mind.
Which is which? You are making your supporters confused.
Govt going bankrupt or not going bankrupt but make huge profits instead?
But at least this article also pointed out that 1MDB had to pay RM2.7 billion to build/upgrade 8 military bases as payment for the Bandar Malaysia land - which completely destroys their previous argument that 1MDB got the land free or super-cheap!
BTW, this article also justifies that 1MDB borrowing to develop their projects will mean that eventually 1MDB will make huge profits and repay their debts - just like how any other business out there does it.