The online media found being Jahat again. This time, the Malaysian Insider (again).

Yesterday, July 2nd 2015 at 12:16pm, The Malaysian Insider (TMI) published this story that tried to maliciously slander PM Najib by putting words into Najib's mouth where he allegedly said that the increasing collection of Zakat were among the reasons why Fitch Ratings upgraded Malaysia's sovereign outlook.

Hours later, the Prime Minister's Office (PMO) came out with angry statement on their official FaceBook account denying that there was ever such a statement made by PM Najib.


The PMO said it was "kesal" or disappointed that The Malaysian Insider tried to spin PM Najib's statement to create an environment of hate and misunderstanding among the public.

A few hours later, the same article on The Malaysian Insider has disappeared and now shows this. But you can see from the comment in that page that such article did indeed exist before.

The Malaysian Insider has been spinning and lying press reports umpteenth times before and this is the first time that the PMO came out and rebutted the article so strongly - hence causing TMI to do a U-turn.

This quick U-Turn to delete the article by TMI is probably due to the show-cause letter issued by the Ministry of Home Affairs to TMI's parent company, The Edge just two days ago. Read "Home Ministry issues show-cause letter to The Edge over 1MDB coverage".  giving them 7 days to reply why their publication and printing permit should not be revoked.

In fact, The Edge cowardly but smartly stood down and finally announced they won't be using the disputed and allegedly tampered PetroSaudi emails anymore which was originally published and still published by Sarawak Report.
The Malaysian Inciter is fully owned by The Edge group and I guess the TMI people are now more scared of publishing inaccurate reports and lies since their own parent is in hot water with the authorities.

Heck, it was only a few days ago and only after PAS was kicked out from Pakatan by DAP did they only finally realize that the online media comprises of 80%-90% "spin" and has a "hidden agenda.


Party information chief Nasrudin Hassan Tantawi said people were consuming the wrong information, especially via the new media by those whom he branded “enemies of Islam” and “with certain agendas”

"For example, there are hidden agendas in news reports that are sometimes 80% to 90% 'spin'," Nasrudin singled out The Malaysian Insider and Malaysiakini in their reports on his speech. 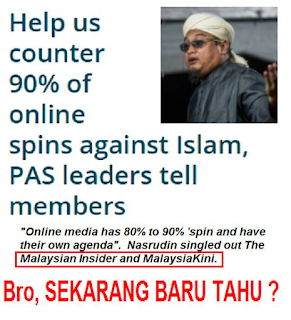 Now only you know, PAS? Not bad. Only took you 7 years to notice this.

Fortunately, The Edge and The Malaysian Insider are Malaysian companies that our government still have some form of control over if they cross the line (and they have).

Govt should have been much much harsher on these online media much earlier but alas, that was not the case then.

However, online media such as Sarawak Report, which contrary to its name and not based in Malaysia nor run by Malaysians is a lot harder for the Malaysian government to regulate or take action on..

Recently, Sarawak Report has been accused of tampering documents with regards to 1MDB over the Xavier Justo affair.

They were also caught tampering before in the past regards the 2013-2014 court documents on the divorce case of the son of ex-Sarawak MB Taib Mahmud:

And of course Sarawak Report's "highly credible" post just before GE13 detailing a flood of Bangladeshi phantom voters out to steal GE13.

Of course we later found out such phantom foreign voters allegations was untrue and there were no such 40,000 Bangla phantom voters - that even BERSIH and the rest of Pakatan Rakyat soon disowned any knowledge of ever making such allegations before.

Last week, Home Minister Ahmad Zahid has also promised to take action on Sarawak Report too but what can you do?
Sarawak Report is a online portal that, despite its name:


Unlike The Edge and TMI which are run and owned by Malaysians, Sarawak Report can post whatever they like from wherever they like without worrying about any local printing and publications law.

It remains to be seen how effective Ahmad Zahid can take down Sarawak Report.