Tom Wright is the chief author of the frequent 1MDB articles featured in the Wall Street Journal including the RM2.6b "expose".

I posted 10 questions for him and he tried to answer as many as he could.


Could you shed some light into these questions that I long had:
On the PetroSaudi-1MDB JV
1) Why would the owner of PetroSaudi, Prince Turki the 7th son of their absolute monarch and Governor of Riyadh, their largest province and city, want to collaborate with a Chinese Malaysian to steal Malaysian money? Doesn't the Kingdom of Saudi Arabia with sky-high oil prices then have enough money that it need to steal a mere USD1.83b?

2) Is it possible that the PetroSaudi-1MDB JV is a Government-to-Government initiative with the backing of the King of Saudi and the PM of Malaysia? Both leaders had met quite frequently during the exact period where 1MDB-PetroSaudi JV was created.

3) What is your evidence that Good Star is owned by Jho Low?

4) Is it possible that Good Star was an investment vehicle still fully owned by PetroSaudi but they had engaged Jho Low or his team to manage any funds in there? As I remember from the Sarawak Report expose, there was an agreement for such fund management services.

This is also possible as Jho Low had made his name prior to the Terengganu Investment Authority (TIA), the predecessor to 1MDB was even founded or Najib became Prime Minister

He had used Arab money related to various middle-east royal families to buy over three publicly listed companies in 2007-2008 which is even before 1MDB existed.

On Abu Dhabi's IPIC5)  Why is it that IPIC had never made any public statement confirming that they have lost billions as alleged by yourself?

7) If Billions are missing, would would IPIC continue to pay USD1 billion in cash to 1MDB in June and still take over their USD3.5 billion of bonds and even paid the bond interest for them in Oct and Nov recently?

8) Why is it that after four or five years being existed by the biggest and 2nd biggest audit company in the world, KPMG and Deloitte, none of them could find any evidence of missing billions over so many years?

9) What is the global implications if both KPMG and Deloitte was found to be negligent and could not detect your alleged fraud of this scale of billions of dollars missing? I remember Enron was not even this scale and it was just one of the big audit companies which closed down causing havoc to the worldwide finance industry during that time.

10) Since you mentioned multiple times in your article today that there does not seem to be any Malaysian laws broken, what is your personal motivation to continue pursuing this 1MDB story in a passion that no one else has? Are you in communications with Clare Brown as it seems your articles are coordinated with Sarawak Report. For example, Sarawak Report came out with their own report on the USD850m that you allege to be missing within mere minutes of your WSJ article being published.

Thanking you in advance for your answers.

Tom replied and the following are his answers. 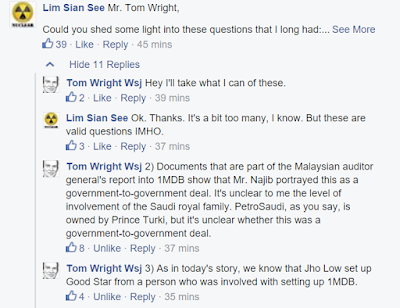 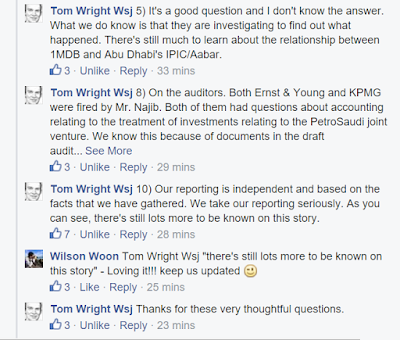 Well, that's it. Tom sort-of answered 5 out of the 10 questions and skipped the rest. He then thanked me for the very thoughtful questions.

Personally I am not happy with his answers and had wanted more details and more convincing answers.

I thanked him for the answers and asked him to feel free to add to his questions when he has the time later.

To be fair, I can't be hogging all his time as he needs to answer the rest of the world on this 1MDB issue.

Let's see if he will come back and answer more. I will update this blog if he does.

I did notice that the likes of Muhyiddin Yassin, Tun Mahathir, Tony Pua, Rafizi Ramli and the rest who wanted to so desperately seek answers about 1MDB were not there to take this opportunity to ask though.

Perhaps they are on their holidays.

There was an interesting question from The Malay Mail Online.

So, let it be on record that so far no one has threatened to harm the WSJ's journalist.
Posted by Lim Sian See at 02:06