One Legacy Problem Solved: The impact on PLUS Highway tolls after the 2011 Govt and EPF take-over

PLUS started with the privatization of the North-South Highway where in 1986, despite the government paying for and building half of the North-South Highway it was mysteriously privatized to known Mahathir-crony, Halim Saad for 30 years from 1988 to 2018 and the new company company was allowed to collect tolls for the entire stretch - with the excuse that MHA was not building it fast enough.

One of the public complaints for this toll-concession and others was the lop-sided toll concession agreements that allowed toll rates to increase like clockwork every few years.

Under the agreement, toll rates for the North-South Highway was allowed to increase 10% every three years.

In 1999, amidst mounting public complaints, Tun Mahathir himself extended the toll by 12 years to 2030 to avoid toll increases as per the agreement (which Tun M himself signed in 1998).

In 2005, it was Pak Lah who signed to extend the toll by another 8 years to end 2038 to avoid toll increases as per the agreement (which Tun M himself signed in 1998).

In fact, it was reported in 2005 that if govt was to freeze all toll increases for the North South Highway, the government would have to pay RM38 billion as compensation to the private owners based on the original agreement signed by Tun Mahathir!

Thus the extension was agreed by Pak Lah.

Like the KLIA express rail link which had a big increase in rates recently or govt has to pay RM2.9b or extend the concession by 30 years to the private company YTL, this PLUS Highway concession agreement is yet another legacy issue that Najib had to deal with

In 2008, it was scheduled to increase again but new Prime Minister Najib did not allow this increase and devised a plan to buy back PLUS Highways Bhd.

(although UEM was taken over by the government as part of the bail out in 1998, PLUS was privatized and listed on the stock market in 2002 to help reduce UEM/Renong's mounting debt then).

Nov 16 2011 — UEM Group Berhad and the Employees Provident Fund (EPF), the new owners of the assets of PLUS Expressways, have waived their right to some RM6.5 billion in compensation in exchange for extensions to the concession periods for the Penang bridge and two other highways. UEM and EPF also said that toll increases for the North-South Expressway (NSE), the crown jewel of PLUS, will be lowered from 10 per cent every three years to five per cent at the same intervals, while the Penang Bridge will see no increase. The government owed PLUS billions in compensation due to the decision to freeze unpopular toll hikes that were stipulated in the original concession agreement, until 2015.

As part of this deal, EPF financed the RM23 billion purchase by subscribing to bonds issued by PLUS and govt is now fully in control of it - making negotiations much easier since government will essentially be negotiating with government.

Thus, RM6.5b owed by Government as compensation since 2005 has now been waived and the govt went ahead and renegotiated the concession agreement.

As a side-note, contrary to public perception and in order to increase transparency and fairness, when Najib became Finance Minister in Sept 2008, one the first thing he did was to declassify all toll agreements.

These are the changes to the toll rates increase after PLUS Bhd was taken over in 2011 and the rates renegotiated:

Given the length of the toll concession and its compounding effect, this revision is very significant, as you can see from the simulation below: 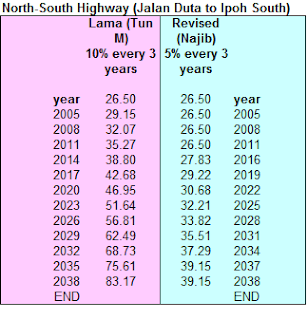 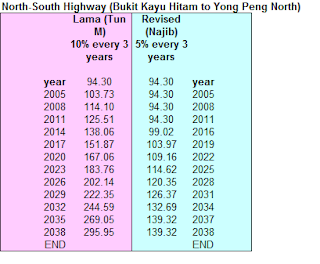 In fact, an increase of 5% every 3 years is just 1.7% per year increase - much lower than inflation.

Future generations of Malaysians should be giving thanks to Najib.

As part of the above negotiation package, other toll roads that PLUS Bhd owns were also revised:

B) Singapore Linkedua Second causeway toll rates increases revised down from 25% every 5 years to 5% every 3 years with no extension to the concession period. 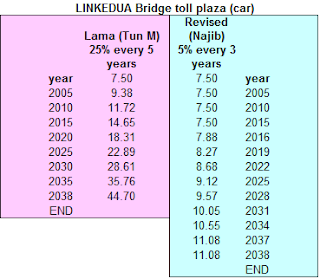 C) Elite Highway toll rates increase revised down from 10% every 3 years to 5% every 3 years but the toll concession period was extended by 8 years from 2030 to 2038. 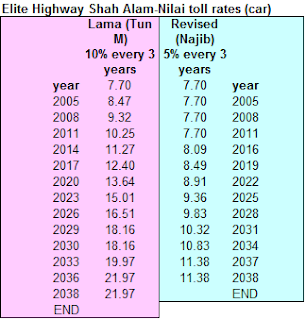 D) The Butterworth-Kulim Expressway (BKE) Toll rates increase was reduced down from 25% every 5 years to 5% every 3 years but concession period was extended 12 years from 2026 to 2038. 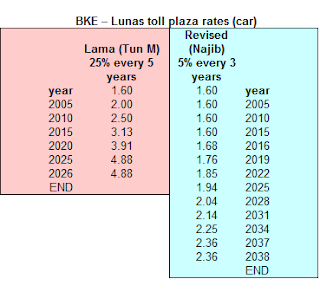 E) Penang Bridge toll increases revised down from 10% every 5 years to no increase forever but the concession period was increased from the year 2021 to 2038. 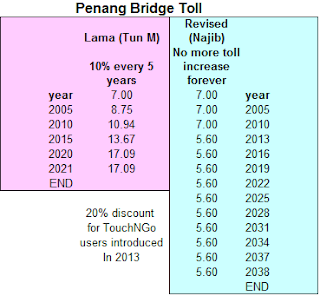 All in all, the government has negotiated well on this to provide overall big savings to the public while still being fair to EPF and the government.

EPF gets a great investment with a minimum internal rate of return (IRR) on the investment in PLUS to be at least 10% in accordance with EPF's general guidelines - meaning continued good dividends for the EPF account-holders.

Although Govt now controls PLUS, it cannot abolish all tolls on this as the company still needs to pay off the RM23 billion debt which was mostly subscribed by EPF and used to buy the highway company. To abolish this now would mean not being fair to EPF holders.

And even with this much revised down toll-rates increases allowed, PLUS Bhd can still continue to maintain the highways as well as fund current and future highway expansions including the additional lanes for the Penang Bridge as well as along the North-South Highway.

In fact, tolls on the North-South Highway have not increased since the year 2005 - 11 years ago now.

At least in the case of the North South Highway, which is an inter-city (toll ANTARA bandar) highway, there may not be an increase.

"Works Minister Fadillah added that the Works Ministry intends to honour the promise made by the ruling government in 2013 that they will gradually reduce rates on intercity expressways by 2018."

Again, this is one of the legacy problems left behind that Najib had to solve where lop-sided toll concession agreements owned by private companies had caused hardship for the public or the government.

In the case of toll highways, Najib had started with the largest toll operator PLUS but it remains to be seen if government will also continue to restructure other toll highways in Malaysia still owned by private companies.

At the very least, the 2,200km Pan-Borneo Highway being built by Najib Govt will be completely toll-free and financed using alternative models - with no privately-owned company operating this ala Tun Mahathir.

Even Tun Mahathir himself admitted that he made a mistake with these toll-highway concessions when he said in 2007 :

"This is one of thing that we need to correct. What you have is a cabinet which is not very knowledgeable all the time because it is not made up of experts but politicians (and) some politicians like myself can sometimes be stupid," he said when told by reporters that all the five tolled expressways were constructed during his 22-year tenure as prime minister.

"The cabinet merely gave approvals in principle and never really studied the implications in some parts of the agreements." 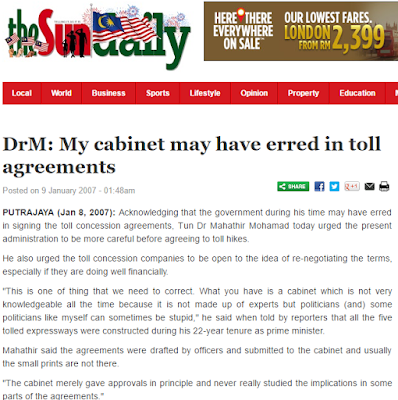 Well, someone has to clean up the many mess Tun Mahathir left behind - and much work has already been done by the Najib government on these including car prices, unfair IPPs, Approved Permits (APs) etc.

I will write more about these in future.

Note: the above toll calculations are based on Publicly available  information. It is best-effort basis and I make no warranties that the calculations above are 100% correct. I may be making changes on these should further information be made available or others point out errors in it.

Note 2: Contrary to public perception, when Najib became Finance Minister in 2008, the government had declassified all toll agreements.
Posted by Lim Sian See at 02:01