Are you sure Tun M has no influence at all on our economy?

BNM released a statement saying that there were bigger issues affecting the strength of our currency.

“The central bank wishes to reiterate that the current movements of the ringgit are affected by both global and domestic developments,”

“Global developments would include the investor expectations relating to monetary policies of major central banks and the trends in crude oil and gas prices. Domestic factors include concerns about government-linked entities and ratings related issues.”

The Central Bank remains focused on its role and mandate in maintaining monetary and financial stability and to support sustainable economic growth. The Central Bank has never been and will not be drawn into any political agenda but will remain accountable for delivering its mandates to the people of this country.

Singapore-based economist at Mizuho Bank Ltd, Vishnu Varathan, was reported by Bloomberg as saying, “Bank Negara is telling markets to look beyond the political noise and the current market volatility, as fundamentals remain sound. The other message is that Bank Negara is apolitical as it is a highly professional and sound central bank.”

The “political noise” in question is the current spat between Prime Minister Najib Razak and ex-premier Dr Mahathir Mohamad who is pushing for the former’s resignation, which Deputy Finance Minister Ahmad Maslan said BNM had indicated was contributing to the ringgit’s sluggish performance.

Commenting on this statement, Nizam Idris, head of foreign-exchange and fixed-income strategy at Macquarie Group Ltd. in Singapore, said, “In itself, the political noise is not a significant factor for the ringgit.

“But Mahathir’s comments basically bring the focus to 1MDB, slightly more than what it could have been. It leads the market to think about potential contingent liabilities on the government and therefore a potential downgrade on Malaysia’s rating,”
----
My comment: Essentially, BNM was saying that.. "Yes, Tun M is a contributing factor to political instability and also aggravated the concerns on 1MDB but he is NOT THE ONLY factor or reason for the recent weakness. BNM is not interested nor allowed to play politics therefore don't quote us in any political attacks"

2) Tun M also aggravaated the concerns on 1MDB with his continuous "Mana itu Rm42b or RM27b or berbillion?" although answered many times.

3) Aggravated concerns on 1MDB and our contingent liability AND political instability definitely contributed to uncertainty and confidence in our local economy.

4) Therefore, I am afraid that Ahmad Maslan was right. Tun M is indeed A contributing factor in the currency weakness - but not the main factors.

What Ahmad Maslan was wrong in doing was to use BNM's name when giving the reason.

5) It is unthinkable that given his track-record in changing the Prime Minister prematurely, Tun M has ZERO influence on political instability and economic uncertainly.

To say that Tun M has zero influence on our economy is just fooling one-self. 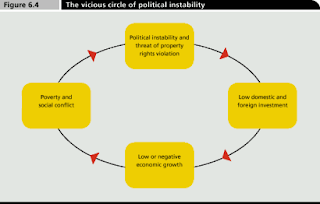 In fact, the incredibly-biased (against BN and Najib) William Pesek even confirmed as much when he wrote three days ago in his column in Bloomberg:


" Mahathir now has a new target -- Najib Razak, Malaysia's current prime minister. The daily squabbling between Najib and his predecessor has unsettled Malaysian markets, with the ringgit falling to its lowest value in a decade."

William Pesek;s article was a real mess and wholly inaccurate, which led the normally reserved Idris Jala to write a rebuttal completely tearing apart William Pesek which started with:

"When I read William Pesek’s latest commentary on Bloomberg View, I barely recognised the country he was writing about."


"Differing opinions are bound to be expressed on Bloomberg View. The defence of “fair comment”, however, does not apply to getting facts so woefully wrong. We would hope that the editors at Bloomberg agree, and will correct or take down such a disgracefully biased and ill-informed article.?

Remember that Idris Jala is listed by Bloomberg Markets itself as one of the 50 most influential people on earth for last year - hence Idris condemning a Bloomberg columnist is all the more sweeter and damning.

That that, Mr Pesek!