Is someone deliberately feeding false info on 1MDB to Tun M? (PART 2) - Who started the Terengganu Investment Authority?

According to news reports in December 2008 when Najib was not yet the Prime Minister, the proposal for the Terengganu Investment Authority (TIA) was put forward by the then Yang di-Pertuan Agong, Tuanku Mizan Zainal Abidin, who is also the Ruler Terengganu. The state exco endorsed the proposal. 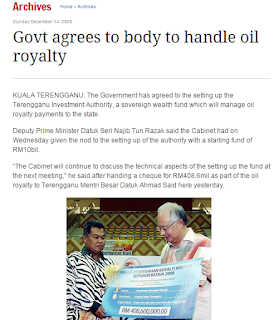 This was from The Star's archives dated Sunday December 14, 2008

KUALA TERENGGANU: The Government has agreed to the setting up the Terengganu Investment Authority, a sovereign wealth fund which will manage oil royalty payments to the state.

Deputy Prime Minister Datuk Seri Najib Tun Razak said the Cabinet had on Wednesday given the nod to the setting up of the authority with a starting fund of RM10bil.

“The Cabinet will continue to discuss the technical aspects of the setting up the fund at the next meeting,” he said after handing a cheque for RM408.6mil as part of the oil royalty to Terengganu Mentri Besar Datuk Ahmad Said here yesterday.

The amount is the remainder that the state was supposed to get for the 2007-2008 period. The TIA was proposed by Yang di-Pertuan Agong Tuanku Mizan Zainal Abidin as a way to channel part of the oil royalty into a sovereign wealth fund which would be operated by a team of professionals and supervised by foreign bankers and investors.

Tunku Mizan will be the chairman of the TIA board of advisers while the Mentri Besar will be also represented on the board.

Najib said the TIA would utilise oil royalty to invest in Terengganu and other parts of Malaysia.

The authority would also have the mandate to invest globally in bonds to ensure the state’s financial sustainability on a long-term basis.

He said revenue earned by the TIA would be able to complement the state’s income when oil and gas resources were exhausted.

As was detailed in The Star's article then, setting up TIA and raising up to RM10 billion was indeed tabled and approved in Cabinet - which corroborates 1MDB's recent reply denying Tun Mahathir's allegation that Cabinet did not approve TIA (now 1MDB) raising the original RM5 billion.

Dec 12 — History will be made soon when the Terengganu state government sets up its own RM10 billion sovereign wealth fund, the first state in Malaysia to do so and a move aimed at ensuring steady revenue after the oil and gas money dries up.The decision to set up the Terengganu Investment Authority — a body to be run solely by professionals — is also an indictment of the unsatisfactory manner royalty funds from oil and gas have been used by politicians for the last two decades.

The Malaysian Insider has learnt that the proposal for a sovereign wealth fund was put forward by the Yang di-Pertuan Agong, Tuanku Mizan Zainal Abidin, who is also the Ruler of the east coast state. The state exco endorsed the proposal at its weekly meeting yesterday.

Political observers say that the decision to set up the authority is probably driven by the desire to ensure that royalty from oil and gas is spent wisely and in the long-term interest of the state, and not squandered on flashy projects. While the oil and gas resources in the state have not been tapped fully, concerns have been raised that insufficient emphasis has been placed on how to maximise the royalty payments.

Under the TIA, the Sultan of Terengganu will be the chairman of the Board of Advisors. The Menteri Besar of the state will also be represented on this board. But the Board of Directors will comprise only professional managers. The idea here is to ensure that investment decisions are made by professionals and without the interference of politicians.

Sources in the state said that RM10 billion will be invested both within Terengganu and also the rest of Malaysia. But the TIA will also have a mandate to invest globally. The RM10 billion will be sourced from the local and foreign capital markets with a proposal for the Federal Government to provide a government guarantee of up to RM5 billion.

As was stated, the original plan was for RM10b to be raised with a RM5b guarantee by the Federal govt. However there was much disagreement then and the story of what happened was never truly told.
However, The Edge is its 14th Dec 2009 issue carried this story, which is also posted on 1MDB's own website here.

Coming back to TIA, the idea was to establish the fund along along the lines of Mubadala Development Company, the SWF of Abu Dhabi. In fact, Khaldoon AI-Mubarak, CEO of Mubadala and chairman of Abu Dhabi Executive Affairs Authority, still sits on the board of 1MDB.

But after the initial RM5 billion, raised by a federal government guarantee, the troubles at TIA began. The state, led by Menteri Besar Datuk Ahmad Said, wanted control over the utilisation of the money, something that went against the charter of the fund.

The funds were supposed to be managed by a professional team and overseen by a board of directors and advisers. It was a triple-layer structure to ensure the money is well spent.

But the prime movers behind the funds found out early that this was easier said than done. Subsequently, TIA became a federal entity, which gave birth to 1MDB.

What The Edge reported was that the then Menteri Besar Ahmad Said wanted control of the entire fund but the Federal Govt was unwilling to allow the entire RM10 billion to be managed by the state govt.
After the initial RM5b was raised in May 2009, a break-up hence ensued and in July 2009, TIA became 1MDB.
In GE13, the state government of Ahmad Said did not do well and only won Terengganu with the slimmest of margin at 17 seats vs 15 seats.
It was then rumoured that Ahmad Said would only be given one more year as Menteri Besar and hence in May 2014, Ahmad Said was forced to resign.
Initially he did not want to go and even quit UMNO and wanted to bring a couple of other Terengganu ADUNs loyal to him out of BN - which would have meant the BN government in Terengganu would collapse.

This triggered a mini Menteri Besar crisis in Terengganu which was resolved by the Prime Minister and Deputy Prime Minister within days with Datuk Ahmad Razif Abdul Rahman being made the new Menteri Besar - a decision that had the approval of the Terengganu palace.
Ex-Menteri Besar Ahmad Said is still a Terengganu ADUN but understandably given his forced exit as MB, he has now become a critic of Prime Minister Najib Razak and can be seen to be at the side of Tun Mahathir in recent events.
It is also important to note that the original plan was to secure the RM10 billion via a RM5 billion federal guarantee and RM5b against future oil royalty payments from the Federal Govt to Terengganu. The TIA did not pledge the oil wells of Terengganu as alleged by Tun Mahathir who accused in his blog: "Najib decided to raise through bonds RM5 billion using Terengganu oil wells as collateral".

The RM 5 billion raised was via a Federal Guarantee and Terengganu did not put their oil wells up as collateral - mainly because Terengganu does not own the oil wells and you can't put up as collateral something you don't actually own!
Under the Petroleum Development Act 1974, the state does not own any oil-wells as they are all owned by the Federal government via Petronas.

I am really surprised that given his wealth of knowledge and experience, Tun Mahathir does not remember about the Petroleum Development Act 1974 and the ownership of oil wells in the country he used to manage for 22 years.